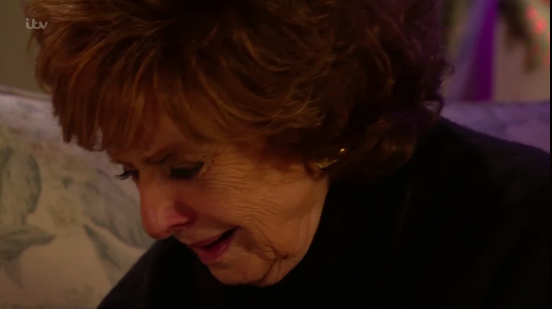 Viewers of Coronation Street have expressed their deep sadness for Rita Sullivan, as she faces a very lonely Christmas this year.

On Wednesday (December 18), the Weatherfield veteran was seen flicking through her photo album in tears – and those watching from home were sobbing with her.

Feeling alone and with no one to reach out to, Rita looked through old photos and collapsed in floods of tears when her eyes fell upon a picture of her and Norris Cole at the Rovers.

As festive songs played outside and the residents of the Street busied themselves with festive prep, Rita felt unbearably lonely as the time ticked slowly by.

The desperately sad scenes are part of a new Corrie storyline focusing on loneliness at Christmas.

Although Rita appears to have lots of friends, viewers know that her trip to visit old pal Emily Bishop fell through at the last minute.

So sad. Poor Rita. That scene reduced me to tears.

With lodgers Paul and Gemma having moved out, Rita has been left feeling increasingly lonely in the house.

Keen not to be a burden, Rita has told the white lie that she’s visiting her old friend Mavis over Christmas – even though she has no such plans.

And Corrie viewers felt incredibly sad for Rita, with one writing: “God that was so emotional to watch. Not looking forward to next few scenes.”

Another said: “I had to turn this off because I was going to cry.”

A third added: “So sad. Poor Rita. That scene reduced me to tears. Please let her have a nice Christmas with all her friends around her.”

God that was so emotional to watch . Not looking forward to next few scenes xx

Many viewers praised the soap for highlighting the issue of loneliness suffered by young and old at this time of year.

One wrote: “Can empathise with Rita. This time of year in particular can be very hard and lonely for a lot of people. Well done for raising awareness of loneliness.”

In upcoming scenes, Rita suffers a nasty fall while she decorates her Christmas tree alone.

Boss Iain MacLeod recently confirmed that Rita will be okay after the fall, but that the accident will have other repercussions.

He said: “She’ll be okay physically, but it will have slightly more far-reaching consequences in terms of her perception of her own life, her role in the world and her role on the Street.

“That will play out over the first couple of months of next year, culminating around February time. She will be physically okay, just to reassure you. I’m not going to expect you to tune in on Christmas Day and watch Rita’s demise. That’s not something I would ever do!”

How to you feel about this sad storyline? Leave us a comment on our Facebook page @EntertainmentDailyFix and let us know what you think!