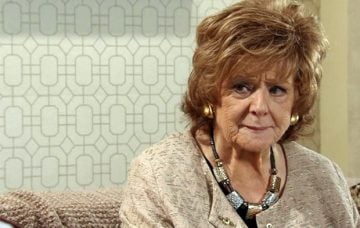 Fans have been terrified she would die

Rita Tanner is set to face a lonely Christmas on Coronation Street, but show boss Iain Macleod has reassured fans of her fate after a freak accident.

Viewers have been terrified the cobbles stalwart would meet her maker after reports she was set to be crushed by a Christmas tree.

In the coming weeks, Rita finds herself feeling vulnerable and alone, especially after lodger Paul Foreman moved out.

She believes she has no friends or family left on the cobbles and feels more and more isolated as surrogate daughters Jenny Connor and Gemma Winter are preoccupied with their own lives.

When Brian gives her job temporarily to Gail Platt, believing Rita to be going away, it’s the final straw.

With everyone close to Rita thinking she’s gone away for Christmas, she ends up home alone.

A freak accident with the tree then leaves her even more vulnerable and also her life in danger.

But fans fearing a Christmas death for Rita can breathe a sigh of relief as Iain confirmed she will survive the accident.