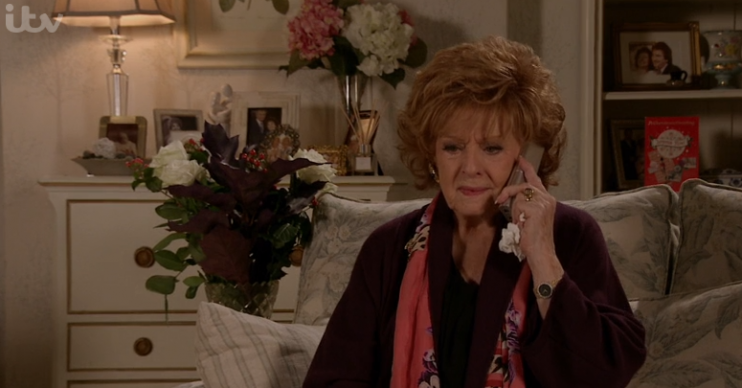 Fans of Coronation Street were left heartbroken as show legend Rita Tanner struggled with feeling lonely and broke down in tears on Monday night.

Viewers know the shop worker was meant to visit friend Emily Bishop in Edinburgh, but her trip got cancelled due to Emily being ill.

With her plans put on hold, Rita asked Brian if she could return to work at The Kabin, but he had already hired Gail Platt.

On top of everything, Rita’s found most of her friends are busy with their families this festive season and with lodger Paul Foreman moving out, Rita is feeling very alone.

In last night’s episodes of the soap (December 9 2019) Rita ran into her old friend Norris and he decided to stay for a cup of tea with her.

But when he couldn’t stay for very long, Rita was left disappointed.

Later, she attempted to call Gemma, who recently gave birth to quads, but the phone went straight to voicemail.

Emotional Rita left her a voicemail saying she was just wondering how everyone was and that she would love to help with the babies.

She then told Gemma to give the babies all her love before hanging up.

My heart is breaking for Rita.

Rita sounded very shaky and vulnerable as she left the message, and it was obvious she was struggling with loneliness.

The camera cut away as Rita hung up the call and it was clear she was beginning to sob.

Viewers were left heartbroken for Rita.

I think poor Rita is feeling a bit lonely #Corrie

Things are only set to get worse for Rita when she has a fall over the festive season.

Although Corrie boss Iain Macleod has confirmed Rita will survive, it’s another blow for the soap stalwart.