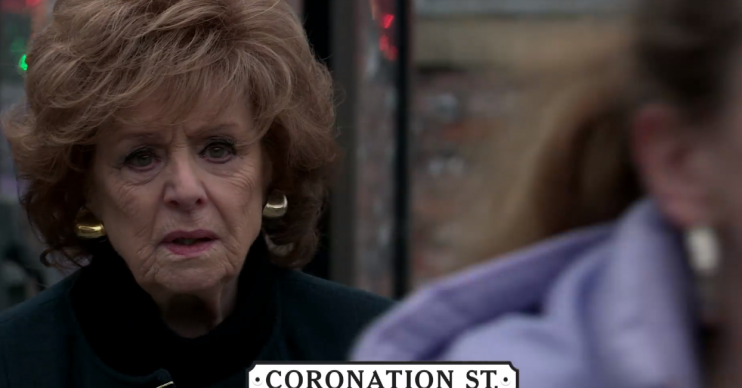 It's going to lead to a heartbreaking Christmas

Rita Tanner is set to face a lonely Christmas on Coronation Street, after she tells a devastating lie to Gemma Winter.

Viewers have watched, heartbroken, as lonely Rita appears vulnerable and emotional in the run up to the festive season.

She does have one companion – Arthur – the cat she’s looking after for Christmas.

She introduces Arthur to Gemma, but with Gemma so busy with her quads, Rita doesn’t want to be an extra burden so quickly makes her excuses.

Rita then tells Gemma she’s arranged to visit her friend Mavis over Christmas.

But it soon becomes clear Rita has no such plans to go anywhere and is facing the festive season all alone.

After the heartbreaking lie, things are looking up when Dev arrives with a Christmas tree to cheer her up.

But when he doesn’t have time to put it up properly and help with the decorations, Rita ends up doing that alone too.

Before he goes she tells him: “It’s a health and safety hazzard,” to which he insists: “This tree is never going to fall…”

Famous last words as disaster strikes and she slips and pulls the unstable tree down on top of her.

Will anyone find her? And will they make her realise she’s not all alone?

Show boss Iain Macleod has already reassured fans of her fate after a freak accident.

For those fearing a Christmas death for Rita, you can breathe a sigh of relief as Iain confirmed she will survive the accident.