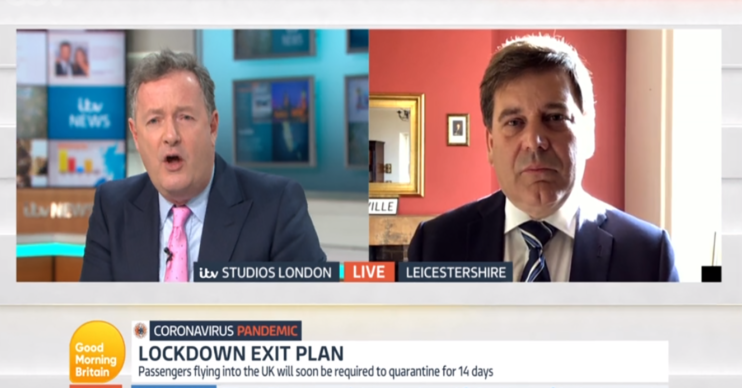 TV’s Piers Morgan‘s interview with MP Andrew Bridgen on Monday (May 11) has clocked up 281 Ofcom complaints.

Despite only returning to Good Morning Britain that day after a week off due to a coronavirus scare, Piers still managed to upset the backbencher.

What happened in the interview?

Piers let rip at Mr Bridge after he accused him of a ‘diatribe’ against PM Boris Johnson.

Speaking about the new Government advice, Piers asked if he was allowed to visit his sons at a distance.

Andrew Bridgen replied: “I do not speak for the Government, as long as you maintain social distancing in what you do.”

Piers was furious with the response, saying it was ‘completely against the new rules’.

He said: “You are a Conservative Member of Parliament, who thinks you know exactly what Boris Johnson has been saying.

“You just told me to do something I’m not allowed to do.

It’s a load of flannel, talking about controlling the virus.

“So this is the problem isn’t it? There is no clarity.

“It’s a load of flannel, talking about controlling the virus.

An exclusive YouGov poll for Good Morning Britain reveals that only 30 per cent said they understand the new 'stay alert, control the virus, save lives' message.@piersmorgan and @susannareid100 challenge Tory MP Andrew Bridgen on the confusion over the govt's new guidelines. pic.twitter.com/fEJ40LsKzf

“You as a leading, high-profile Conservative politician haven’t got a clue about what these rules actually mean, and you’re an MP.

Meanwhile, Piers went on: “We’ve had no PPE for the NHS frontline workers, that’s why 200 of them have died.

“And when you come up and say: ‘I heard your diatribe against Boris Johnson.’

Many viewers called the interview ‘savaging’.

Meanwhile, Piers has been continuously critical of the government’s response to the coronavirus.

He’s furious that the government has now banned its ministers from going on the show.

It’s not the first time Piers has received complaints.

Last month, he was cleared by Ofcom after 4,000 complaints over his interviews with care minister Helen Whately and health secretary Matt Hancock.