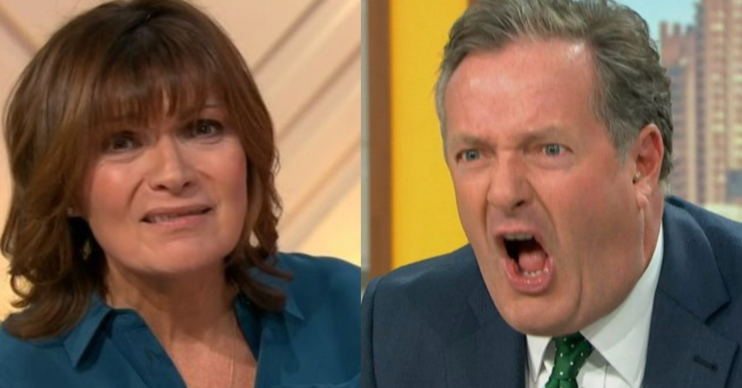 The GMB host has spoken out to defend himself

Those tuning in at home couldn’t help but compare the show’s guest line-up in comparison to others.

While Amanda Holden was the host’s biggest interview of the day, his colleague Lorraine Kelly as joined by the Home Secretary Priti Patel.

Laughing at the fail, viewers were quick to take to Twitter to blame Piers.

One wrote: “Piers Morgan and Susanna Reid big guess for the day to interview Amanda Holden I’ll say no more.”

Shortly after, a third commented: “@GMB Piers gets his pal Amanda Holden on plugging her single, whereas Lorraine gets the Home Secretary and engages in a very pleasant exchange with the governments Home Secretary. Theirs your difference.”

A fourth then added: “Why don’t you get any politicians on instead and ask some proper questions??”

.@AmandaHolden is aiming to get to no.1 in the charts with her debut single with all the proceeds going to @NHSCharities.

Here she opens up to @piersmorgan and @susannareid100 on why the NHS holds such an important place in her heart. 😢🥰 pic.twitter.com/064J4FCY32

Is Piers to blame?

Some have blamed Piers for ministers refusing to be interviewed on Good Morning Britain.

They claim that his habit of repeatedly talking over guests and sometimes aggressive questioning has led to MPs blacklisting the host.

Clearly aware of the allegations, Piers spoke out via social media to criticise the government.

He wrote: “Once we allow the Govt to boycott news outlets like @GMB for asking ministers tough questions, it’s a slippery slope to a totalitarian state.

“Other news organisations should share our disgust at this, because they could be next. Or they will soften criticism to avoid a ban…”

Piers had hoped that Rishi Sunak would come on the show this morning for an interview.

However, the Chancellor declined the invitation leaving the presenter furious.

Piers vented: “Chancellor @RishiSunak has refused to come on @GMB tomorrow to inform our viewers about his new economic measures for this crisis.

“This is the 14th day of the Government’s boycott of our show for asking tough questions during a national emergency.”

'The science has told us that that would not work.'

Home Secretary @pritipatel says that while the government is working to introduce measures at the border, temperature checks and testing wouldn't work. pic.twitter.com/UEEYM7nJG6

When one of his followers told the presenter it was probably because he wouldn’t give Rishi the chance to actually speak, Piers was having none of it.

He snapped back: “What nonsense. Ministers all get plenty of time to speak on @GMB.

“But if they don’t answer the question, or lie, or obfuscate, or deliberately answer a different question, or say something stupid, then I will interrupt them to get a straight answer.