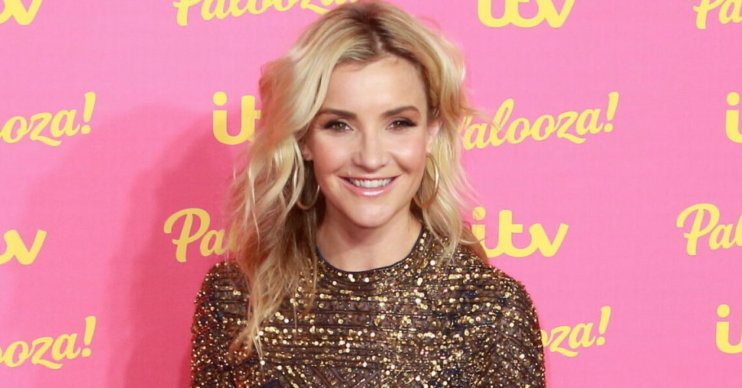 She was seen mingling with Dan Walker

Helen Skelton has enjoyed her first public outing since her split from husband Richie Myler.

The Countryfile star shared the sad news that she had split from Richie, who she shares three kids with, last month.

Since then, he has moved on with new girlfriend Stephanie Thirkill.

They went public with their relationship on a romantic dog walk earlier this week.

And now Helen has broken cover.

The TV presenter headed out last night (May 12) to attend the Sports Industry Awards in London.

She looked bright, bubbly and happy as she graced the event’s red carpet.

Helen’s long dark grey locks – changed up recently from her usual blonde – were worn down and in loose waves.

Very sad to say Richie and I are no longer a couple.

She wore a cream midi dress which showed off her slim figure, teaming the dress with a chunky gold necklace, black stilettos and a matching black handbag.

She smiled as she posed solo on the red carpet.

Once she got inside, Helen was pictured posing with a glass of bubbles.

He looked pretty darn dapper in a blue velvet tuxedo.

He also shared a selfie taken with Helen and a fellow partygoer, with the trio beaming widely for the snap.

When did Helen Skelton split from her husband?

It’s doubtless been a tough few weeks for Helen, but you wouldn’t know it looking at her smile.

She was married to Richie for eight years and, just four months before their split, had given birth to their youngest child.

They couple are parents to Ernie, six, Louis, five, and baby Elsie Kate, who is just four months old.

Announcing the split, Helen gave no reason for the end of their romance.

She did, however, admit that the news was “very sad” and Richie was no longer living in the family home.

“Very sad to say Richie and I are no longer a couple. He has left the family home,” she said.