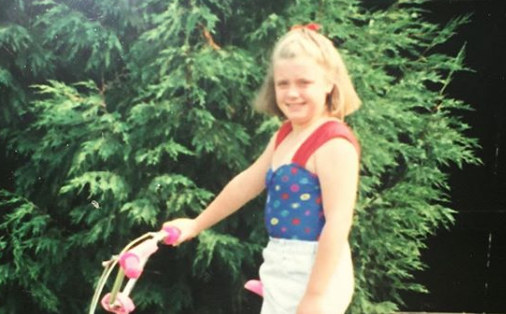 This little cutie is best known for her stints on The Only Way Is Essex and Dancing On Ice.

She has gone on to land her own TV shows after entertaining the public and being a self-proclaimed “diva”.

The star made headlines earlier this year for clashing with Dancing On Ice judge Jason Gardiner and for splitting from her famous boyfriend twice within the space of a few months.

Read more: Gemma Collins’ fans offer support as she reveals her mum is in hospital

The photo shows a fresh-faced Gemma riding a bike as she had her blonde locks tied in a red bow.

Gemma has grown up to be one of the biggest reality TV stars in the UK.

The star recently revealed she’s going to try and crack Hollywood and is planning to move to the states to make her dreams a reality.

She first spoke about her intention to head to America in March.

During an appearance on The Jonathan Ross Show, she said she’d had a number of signs telling her to move to the States and wanted to follow her intuition.

Gemma said on the show: “Last weekend, when I was in Paris, Oprah Winfrey was there. The minute I saw Oprah… I thought ‘I’m going to America’.”

The outspoken star has made headlines for a variety of different reasons this year, including her relationship woes with on-off boyfriend James ‘Arg’ Argent.

They first split in February after Arg made comments about her weight – something he later apologised for and then the pair got back together.

However, last month, it was reported that Gemma and Arg had split again after they reportedly had a massive fight, in which Gemma apparently branded Arg an “embarrassment” and blocked his phone number.

At the weekend, Gemma appeared to confirm she and on-off boyfriend James ‘Arg’ Argent had split for good.

Sharing a screenshot of a Daily Mail article about her new clothing collection, she expressed her excitement at the next stage in her life.

“Thank you @dailymail for an amazing piece for my clothing brand,” she said. “Taking it stateside – L.A. counting down the days.