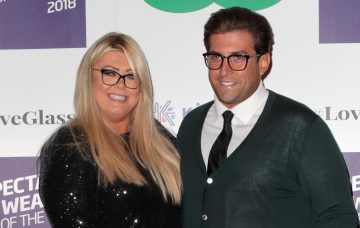 They've had a huge row, apparently..

Gemma Collins has reportedly split from her boyfriend James ‘Arg’ Argent after he posted a clip of her snoring on social media.

Arg, 31, had apparently shared a video of Gemma fast alseep on Friday before it was deleted from his Instagram account shortly after.

According to The Sun, the Dancing On Ice star kicked Arg out of her house after they had a huge row over the post.

A source told the publication: “Gemma had to end it because she was so embarrassed by what James had done.

“She felt he had humiliated her and there was no choice but to end things.”

Just a couple of weeks ago, Gemma admitted that, although it is her dream to become a mum, Arg was the one who kept talking about starting a family and that they might start trying this year.

She said during an appearance on Loose Women: “Arg is the one that keeps going on to me about it. Then he said: ‘I would like to be married first’.

“We’re definitely going to marry. He wants to do it all properly.”

Gemma has said she suffers with polycystic ovaries, and in the past she has voiced her worry about her ability to fall pregnant and that her biological clock is ticking.

She explained that her doctor has formulated a plan for when she does start trying with Arg.

Gem revealed she would go on a medication called Clomid, which helps ovulation, and she may start using the drug at the end of this year.

She added: “I got two second opinions. Everything is going to be OK. I need to lose weight and take a drug called Clomid, which I’m looking to do at the end of the year.”