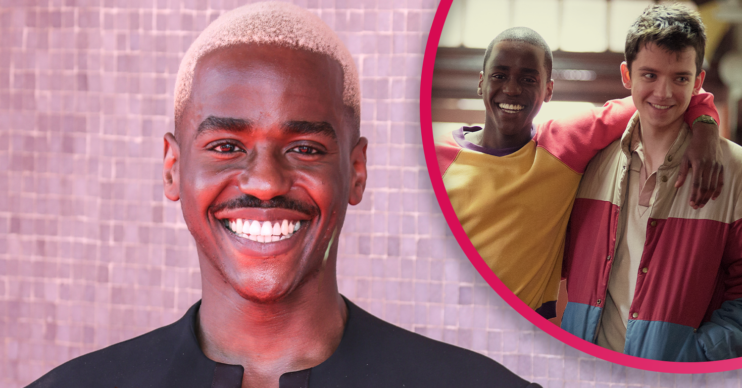 Who is Ncuti Gatwa? How do you pronounce his name? What’s he said about being the next Doctor Who?

Who is Ncuti Gatwa was the question on a lot of people’s lips last night (May 8) as the actor graced the red carpet at the 2022 BAFTAs.

Of course, Sex Education fans will be familiar with the star, who plays the Netflix series’ loveable Eric.

However, it appears his star is most definitely on the rise with the news that he is to become the next Doctor Who, taking over from Jodie Whittaker.

So who is Ncuti Gatwa, what’s he been in before and what’s he said about taking over as the Timelord?

Well read on and we’ll tell you!

Who is Ncuti Gatwa?

How do you pronounce Ncuti Gatwa?

The actor’s full name is actually Mizero Ncuti Gatwa, but he drops the Mizero.

Ncuti is pronounced Shoo-ti, with the Nc spoken like a soft “sh”. It means friend in Kinyarwanda, the national language of Rwanda.

His surname is pronounced Gat-wa.

Where is Ncuti Gatwa from?

His father Tharcisse is a journalist with a PhD in theology.

The family escaped Rwanda during the genocide in 1994, when Ncuti was just two years old.

They settled in Scotland, with the Gatwa family living in Edinburgh and Dunfermline, where Ncuti went to school.

There aren’t quite the words to describe how I’m feeling. A mix of deeply honoured, beyond excited and of course a little bit scared.

He moved to Glasgow to complete a BA in acting at the Royal Conservatoire of Scotland, graduating in 2013.

Ncuti joined the Dundee Repertory Theatre after that where he performed in several productions.

He also had a small role in the 2014 sitcom Bob Servant, before appearing in a supporting role in the miniseries Stonemouth.

Ncuti also appeared in the 2016 production of A Midsummer Night’s Dream, playing Demetrius, at Shakespeare’s Globe.

However, it was his role as Eric Effiong in Sex Education that really shot him to fame.

The actor joined the cast for its debut series in 2019 to huge critical acclaim.

He received praise from critics and audiences alike, particularly for how Eric was not relegated to the cliche of “gay or black best friend/sidekick stock character”.

Reflecting on one scene, where Eric appeared in drag, Ncuti admitted it took him way out of his comfort zone.

However, in an interview with the Radio Times, he said the experience left him feeling braver than ever before.

“There was one scene in which I wore a wig, full make-up and stilettos and thought, oh my God, my family, all my friends in Tottenham! Nobody’s ever seen me like this before…

“It was definitely a challenge but it helped me become braver as an actor. I had to get over a lot of my own insecurities and concerns about how other people would judge me. And I felt amazing.

“I’ve never felt that brave in my own life, so it was very cool to experience that through him,” he added.

But are they pals in real life?

It most certainly seems so!

Chatting to Junkee, Ncuti said: “Asa is like, so chilled. He’s such a chilled-out guy, and he’s very, very lovely. The chemistry we have I think definitely comes from you. You’re just Asa from Hackney to me, you know what I mean?”

Asa added: “I think me and Ncuti both bring a lot of ourselves to these characters, and very quickly we both realised how much fun we were going to have.

Sex Eduction has been confirmed for a fourth series, with Ncuti expected to reprise the role of Eric.

Read more: Netflix fans are convinced the stars of 365 Days are having sex for real

What has Ncuti Gatwa been in?

Most notably, he’s appeared in Sex Education, where he plays Eric.

However, his upcoming role in Doctor Who is most certainly the part that’ll shoot his star stratospheric.

Ncuti Gatwa announced as the next Doctor Who

On May 8, it was announced that he will play the 14th incarnation of The Doctor in Doctor Who.

He will take over from Jodie Whittaker, the first female Doctor.

He will become the first black actor to play a primary incarnation of the character.

Ncuti is expected to appear in a special episode later this year to celebrate the BBC’s centenary.

“It’s an institution and it means a lot to a lot of people, including myself,” he said on the BAFTAs red carpet last night (May 8).

“It makes everyone feel seen as well, it’s something everyone can enjoy.

“I feel very grateful to have had the baton handed over and I’m going to try and do my best,” he concluded.

He added to the Radio Times: “There aren’t quite the words to describe how I’m feeling. A mix of deeply honoured, beyond excited and of course a little bit scared.

“This role and show means so much to so many around the world, including myself, and each one of my incredibly talented predecessors has handled that unique responsibility and privilege with the utmost care.”

Russell T Davies on Ncuti Gatwa as the Doctor

Doctor Who show runner Russell T Davies also spoke to the Radio Times at the BAFTAs.

He revealed: “It was an amazing audition and [Ncuti was] the last person to audition.

“I thought someone else was a guaranteed hit and then in [Ncuti] came and that person will never know.”

He went on to add that the actor “simply stole it because it was so brilliant” and noted his “unlimited potential”.

Of course, Davies was also the man behind Channel 4’s smash hit series It’s A Sin.

Ncuti Gatwa steals the how on the BAFTA 2022 red carpet

The actor walked the red carpet hours after the announcement about Doctor Who was made.

He shone like the true star that he is on the brink of becoming.

Ncuti looked sensational in an all black ensemble, which had a cut-out section that bared his muscular physique.

He attended with Russell T Davies and was seen holding hands with Sex Education co-star Aimee Lou Wood, who plays Aimee in the show.

Is Ncuti Gatwa in a relationship?

The actor is fiercely private about his personal life and he has never discussed his own sexuality.

Recent interviews have stated that he prefers not to talk about his personal life.

As a result, he hasn’t hasn’t spoken publicly on whether or not he’s dating anyone at the moment.

However, reports did suggest that he was dating actress Jessica Harwick for a few months back in 2018.

This stemmed from an Instagram picture of the pair on a night out together.

However, they could just be good friends, having both studied at the Royal Conservatoire of Scotland.

What has Ncuti Gatwa signed up for next?

Posting to Instagram the morning after the BAFTAs, he shared details of his next project.

Ncuti – and his Sex Education co-star Emma Mackey, who plays Maeve – have been announced in the new Barbie biopic.

It stars Margot Robbie in the title role and a Hollywood cast including Ryan Gosling, Will Ferrell and America Ferrera.

Posting a selfie to his Instagram Stories, Ncuti said: “After yesterday [my] heart is very very full.

“Off to spend a day frolicking with Ryan Gosling and Margot Robbie.