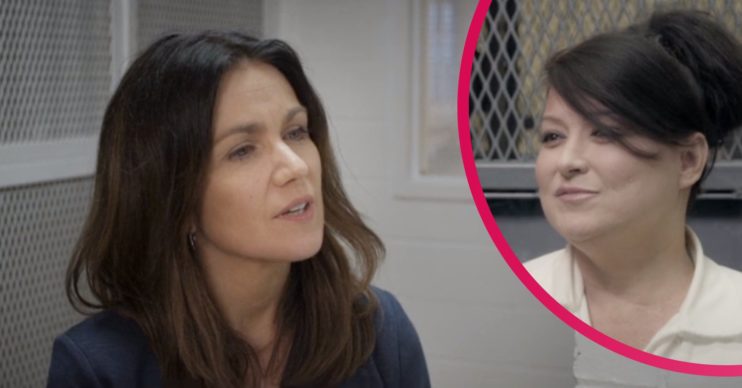 Speaking about the inmate and filming the show earlier this week on Loose Women, the TV host admitted getting support from the production team as it was a “very emotional experience”.

What did Susanna Reid say about her death row documentary?

She said of her documentary, speaking to Ruth Langsford and the rest of the Loose Women panel: “[It was] pre-covid and an utterly chilling experience.

“I was on death row meeting a notorious killer, Darlie Routier. Now, she was 26 years old back in 1996 and the story, as she tells it, is that she woke up one night with her wounded five-year-old child pressing on her shoulder.

“She wakes up at home to see an absolutely bloodied scene; her six-year-old son has been brutally murdered, her five-year-old dies shortly after he’s taken to hospital. She [has a slash] across the throat and says an intruder burst into her home just outside Dallas, murdered her two children and tried to kill her.”

Susanna went on to explain how the police refuted her claims and a jury found her guilty of murdering her children, with the court sentencing her to death by lethal injection.

When she describes the scene of those two little boys and their bodies, it is such a horrific image.

Susanna continued: “I sat down in front of her, it gives me the chills even now. We are the same age… we are both the mothers of three boys.

Loose Women presenter Judi Love said: “It’s so chilling what you’re saying to us. And from my background in social work and youth offending I’ve seen some horrific things.

“It makes me want to ask you, were you emotionally supported before and after doing this documentary?”

Read more: Susanna Reid praises Meghan Markle for her devastating miscarriage revelation as she breaks the news on GMB

Susanna explained: “By the production team, yes, it is a very emotional experience, isn’t it?

“When she describes the scene of those two little boys and their bodies, it is such a horrific image. She was in tears.

“The viewers might think they were crocodile tears, [but] I was so moved by what she was saying, because whether she is guilty or innocent, those two boys lost their lives that night, and that is a really terrible thing to hear and imagine.”

Are you watching Susanna Reid’s death row documentary? Leave us a comment on our Facebook page @EntertainmentDailyFix and let us know.