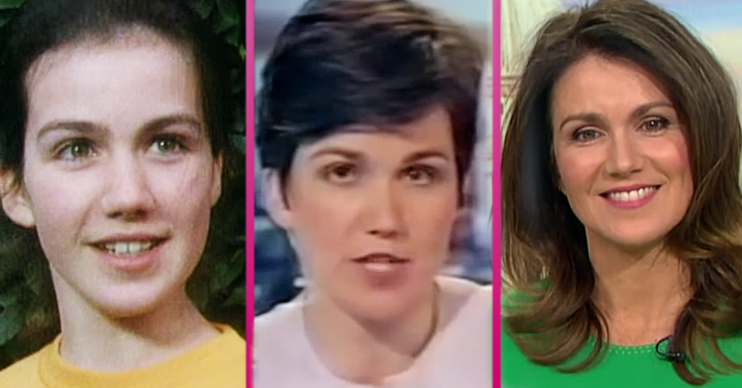 GMB: Why is Susanna Reid not on today?

She's absent on her 50th birthday!

She normally hosts the breakfast show with Ben Shephard on a Thursday, but Charlotte Hawkins joins him today.

In honour of Susanna’s milestone, here’s a look back at her glittering career in the limelight. May there be many more to come!

From child actress to breakfast TV favourite, Susanna has been a ray of sunshine in viewers’ lives for over two decades.

But where did it all start for GMB star Susanna Reid?

When did GMB star Susanna Reid first appear on television?

Susanna started her acting career in a stage version of Agatha Christie’s Spider’s Web in 1982.

Then it was on to TV, where she starred in the 1985 IRA thriller The Price on Channel 4.

Despite being a teen, she performed brilliantly and acted alongside Casualty legend Derek Thompson, who went on to play Charlie Fairhead in the BBC medical drama.

It was a move into TV journalism that set her up for the rest of her career.

Susanna then landed a plum role of co-presenting on BBC Breakfast in 2003.

She formed an irresistible bond and presenting partnership with Bill Turnbull and was a huge hit with viewers.

Becoming a household name, she became known for her bubbly personality, probing journalism and occasionally risqué dresses, which some viewers couldn’t wait to leave comments on social media about.

She presented the New Year’s celebrations on the BBC in 2013 before she was poached by ITV in 2014.

Dancing up a storm on Strictly

Susanna accepted an invitation to appear on the 2013 series of Strictly Come Dancing.

Partnered with Kevin Clifton, she was a huge hit with judges and the audience at home alike.

So much so, she reached the final, where she competed against Corrie star Natalie Gumede and Artem Chigvintsev, and Abbey Clancy and Aljaž Škorjanec.

Despite some great performances throughout the series, she lost out to Abbey and Aljaž.

In 2014, Susanna made her first appearance on Good Morning Britain.

The ITV breakfast show had been relaunched after the failure of Daybreak, and Susanna was the big name to get it going again.

During the five years they’ve presented together, they have become one of TV’s top presenting duos.

Reports claim that there was an ‘off-air feud’ between the two in the early days.

But a drunken night out in Soho sorted out their differences.

“You spend hours together every day, you have to put up with each other, agree, disagree and bicker but you have none of the benefits of a marriage and none of the marital ways of relieving the tension,” Piers said of their relationship.

Over the years Susanna has provided us with lots of laughter and some great interviews.

But none are more infamous than when Downton star Dan Stevens appeared as a guest in 2014 to promote a new movie.

Susanna asked him during the interview: “Did you have to beat off a lot of American men to get the part?”

When Dan started giggling, she asked innocently: “Why are  you giggling?”