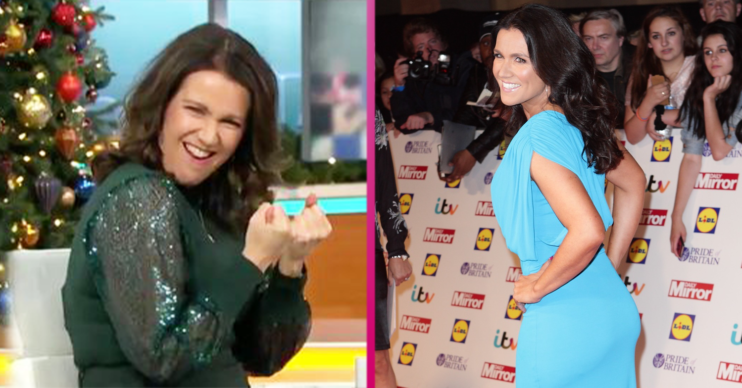 The breakfast TV star seemed elated when her peachy posterior became the topic of conversation.

The GMB host, 49, was stunned when co-presenter Piers Morgan took a moment out of the show to announce her latest achievement.

It turns out, according to the so-called “golden ratio”, Susanna has the best bum in the world.

The golden ratio method was famously used by Leonardo Da Vinci to create the perfect body for his Vitruvian Man sculpture.

What did Piers Morgan say Susanna Reid and her bum?

Piers told Susanna: “Amanda Holden and Susanna Reid have the world’s best bums. They beat Kim Kardashian’s peachy posterior, according to the golden ratio. They have been found to have the perfect golden ratio for posteriors.

“Michelle Keegan and Laura Tobin also scored highly on the theory. It’s a system developed by the ancient Greeks to measure physical perfection.”

Piers then joked: “All of them have come below Reid and Tobin. But the one I feel sorry in all of this is [Charlotte] Hawkins, who hasn’t got a look in!”

How does Susanna Reid feel about the achievement?

After doing a little celebration live on air, Susanna shared how she really felt.

“That is really, really weird,” she added. “I feel like that was a study done pre-lockdown because post-lockdown my proportions are less three-two-three and more six-five-six.”

When Dr Hilary offered to do a “peer review” to make sure the results were accurate, Susanna replied: “That’s not in the least bit sleazy, is it, Dr Hilary!”

What did viewers say about the accolade?

“Well done @susannareid100 on winning best bum. Credit where it’s due!” said one.

“It’s even got its own Twitter page,” another commented.

Health secretary Matt Hancock also appeared on the show to discuss the roll-out of the COVID-19 vaccine.

While discussing the year behind us, Matt then appeared to get emotional – much to the surprise of Piers and Susanna.

After watching William Shakespeare get his jab, Piers asked Matt: “You’re quite emotional about that?”

“You know, it’s been such a tough year for so many people. We can get on with our lives.”

What did you think of today’s GMB? Tell us on our Facebook page @EntertainmentDailyFix.