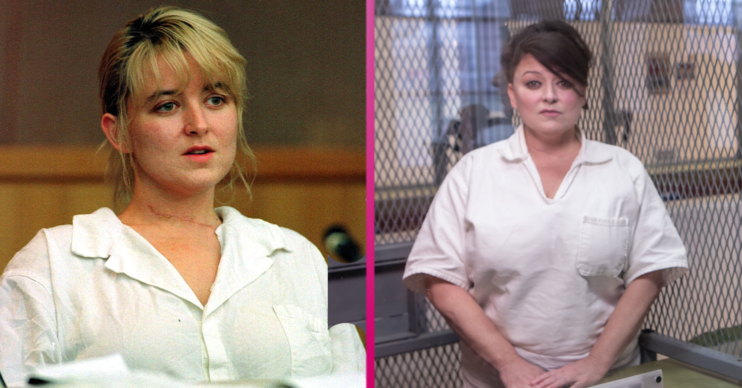 Death Row’s Women With Susanna Reid: How did Darlie Routier’s sons die and what was her alleged motive?

In the first episode she meets Darlie Routier, a mother of three who was accused of killing two of her sons in in 1996.

She was sentenced to death and condemned to live out the remainder of her days on death row.

Some 23 years later, Darlie is still there, and insists she is innocent.

Find out more about the gruesome case below – is Darlie Routier guilty or has there been a miscarriage of justice?

Who is Darlie Routier?

Darlie Routier is a 50-year-old woman from Texas who has been on Death Row for over 20 years, accused of killing her sons, Devon, six, and Damon, five.

She was sentenced to death for the murder of Damon, but was never actually tried for Devon’s murder as prosecutors wanted to keep it in their arsenal.

Darlie has always maintained her innocence, claiming her boys were killed by an intruder.

How did Darlie Routier’s sons die?

Her eight-month-old son Drake was sleeping upstairs with the boys’ father and Darlie’s partner, Darin.

Darlie’s throat was cut so deeply that the blade just 2mm away from causing her to bleed to death within minutes.

She was also stabbed in the arm and had severe bruising.

Devon died at the scene, Damon at the hospital later.

What does Darlie claim happened?

She told police an intruder had slashed a screen to come through the utility room window while she and the boys slept.

The mum of three claims she didn’t wake up as she and the boys were attacked.

She woke up as Damon pressed on her shoulder and then saw a man dressed in dark clothing fleeing the house.

Darlie then alleges that she instinctively picked up the knife he had dropped, then rang 911, screaming into the phone.

Darin rushed downstairs on hearing this and tried to save his boys’ lives.

What does the Darlie Routier defence team say?

They claim that one of the boys’ blood-spotted socks was found in the neighbourhood and there was no way Darlie could have attacked them, run past three houses and got back home in time.

There was also a bloodied fingerprint found in the home and that has never been identified.

In a nutshell, Darlie’s behaviour following the loss of her boys. She staged a party next to their joint grave a week after the murders, on Devon’s seventh birthday.

TV footage showed her laughing with friends and — crucially — spraying Silly String at the gravestones.

Prosecutor Toby Shook said: “She was shooting Silly String on the graves — she didn’t seem concerned that these children had been murdered.

“The tape showed a very strange way to react to death.”

Some 11 days after this incident, Darlie was charged with murder.

What does the prosecution claim was Darlie Routier’s motive?

She was portrayed as superficial and vain, a woman who was frustrated with motherhood.

There were claims the couple, who lived in an upper middle-class neighbourhood in Dallas, were financially struggling and the children were a drain on resource.

When will Darlie Routier be executed?

This isn’t known. Darlie could have a stay of execution if she pleads guilty but she refuses to do so. Her defence team remain convinced of her innocence and continue fighting for her.

What happened to Darlie Routier’s partner and her youngest son?

Darlie and Darin split but he still protests his ex’s innocence, as does her son Drake who is now 25.

Who else on death row does Susanna Reid interview?

Other female prisoners on death row that speak to Susanna Reid have not yet been revealed. ITV has confirmed that the GMB presenter spoke to six in total.

As Darlie Routier has now aired, this means there are five more episodes to come. We’ll update details as soon as we know.

Death Row’s Women With Susanna Reid airs Thursday, 9pm on ITV. You can watch it afterwards on ITV Hub.

What do you think of this case? Head to our Facebook page @EntertainmentDailyFix and let us all know.