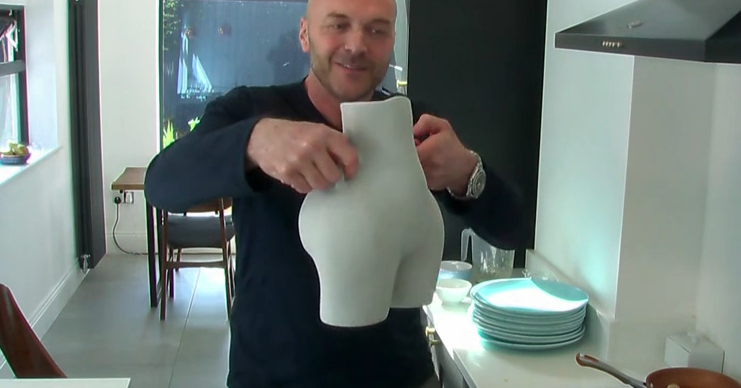 Viewers of the Channel 4 show couldn't believe their eyes

The Channel 4 show’s viewers couldn’t help but comment on the unusual statue in the background of his kitchen during a cooking segment.

Simon, 56, and co-host Tim Lovejoy are currently filming the weekend show from the comfort of their own homes.

However, Simon’s set-up appeared to throw some viewers off today as they noticed a rather rude vase placed on a table behind him.

Joe Lycett called it ‘the back end of something’

Comedian Joe Lycett appeared as a guest on the show and questioned the restaurateur over the vase.

He said: “I do have a question, what on earth is that pot in the background that looks like the back end of something?”

Simon ran over to fetch the vase before showing it off on the camera.

Holding the vase in shot, he said: “Oh, this one?”

Joe replied: “What is going on there?”

However, before the TV chef had a chance to explain, Tim interrupted saying: “We’ve run out of time now! Put that away!”

And it appears fans of the show were just as confused by the strange ornament.

Taking to Twitter, one wrote: “Transfixed on Simon Rimmer’s [bleep] vase on #SundayBrunch.”

Another said: “Jesus, why does Simon have a massive [bleep] statue in the background #SundayBrunch.”

The hit cooking show was recently forced to switch up its format, not long after the coronavirus lockdown.

Announcing the change, chef Simon said: “The safety of our team is obviously number one so it was completely the right decision.”

Tim added: “I think what a lot of people don’t understand is the amount of people it takes to put the show out.

“You’ve got the cameramen, the sound, the lighting, the production, the home economics people who help you out.

“There are so many people so it was the right decision and thankfully everyone is so kind to us out there on social media and understood it so thank you very much.”

– Sunday Brunch airs on Sundays at 9.30am on Channel 4

Leave us a comment on our Facebook page @EntertainmentDailyFix and let us know what you think of Simon’s cheeky vase.