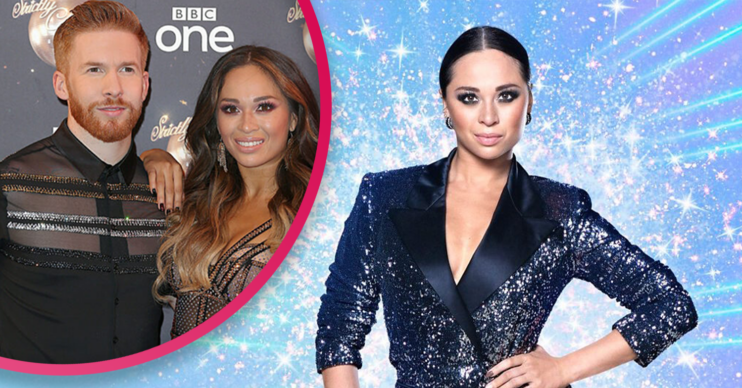 It came almost a year after she kissed Seann Walsh

Katya Jones made Strictly Come Dancing history when she became the first of the professionals to dance as part of a same-sex couple.

She was paired with boxer Nicola Adams on last year’s show. However, they exited early after Katya tested positive for COVID-19.

This year, John Whaite will form part of the first-ever male same-sex couple, but which of the 15 celebrities will Katya be paired with?

And will they help her raise the coveted Glitter Ball trophy for the second time?

Russian dancer Katya, 32, joined the show back in 2016, when she was paired with Ed Balls.

Their iconic Gangnam Style dance is still talked about to this day.

However, it was her star turn with 2017 partner Joe McFadden that saw her lift the Glitter Ball trophy for the first time.

The following year she was partnered with comedian Seann Walsh in what turned out to be her most controversial pairing yet.

Then, in 2019, she danced with BBC sports presenter Mike Bushell, who was eliminated seventh.

Katya started dancing at the age of six, training in gymnastics as well as ballroom and Latin-American.

What happened with Seann Walsh?

Katya – who was with fellow Strictly Come Dancing professional Neil Jones at the time – was pictured kissing her celebrity partner Seann Walsh in October 2018.

And, while she apologised for her actions, Katya did admit it’s not something she regrets.

She said: “There aren’t any regrets because that’s not how I like to lead my life.

Walsh was living with his girlfriend at the time and they split soon after the pictures emerged.

Neil and Katya – who had been married for five years – stayed together till the following summer.

Neil said they’d “grown apart” and Katya admitted that it was a “challenging time” leading up to her 30th birthday in 2019.

“My relationship was going downhill. I didn’t feel happy in my own company until May 2020, when I spent my birthday in lockdown.”

Katya also revealed she used the time since her split from Neil to “better myself”.

So is Katya dating anyone now?

Katya hasn’t so much as been linked to anyone following her split from Neil.

She said she is “happy on my own” but does have days where she wants to “sit down and binge Netflix with someone else”.

Katya added: “I’ve not been actively doing anything [dating] but it must be hard because where would you even meet anybody?”

When that does happen, she’s certain her estranged husband – who’s had one short-lived romance since they split – will be happy for her.

“We’re okay, everybody knows that we are on such good terms,” she told Hello!.

“It’s lovely. We’re really the best of friends – if something happens or we want to share exciting news, we always call each other and check on each other.”

“With Neil, we’re both on such good ground now so we both feel like whatever happens with each other’s romantic life, it’s not an issue at all.”