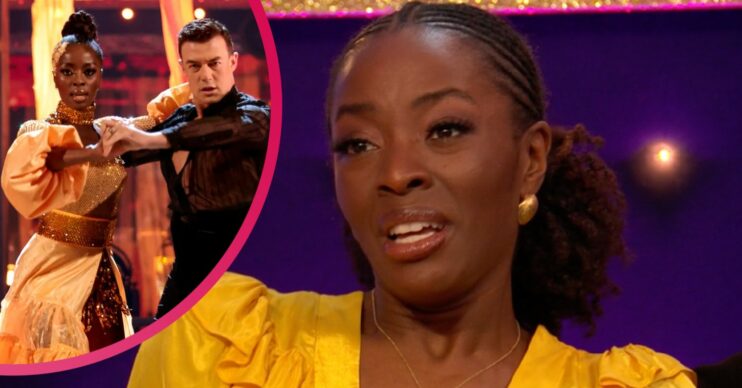 'I had hoped for one last dance with Kai'

AJ Odudu has been left devastated after being forced to quit the Strictly Come Dancing live tour.

The 33-year-old presenter suffered an injury just days before the final, leaving her with no other option but to quit the BBC One show.

Now, AJ and her partner Kai Widdrington have been hit with even more devastating news.

Taking to social media today (January 6), AJ confirmed that she won’t be joining her fellow Strictly stars on the tour.

The star has withdrew due to her ongoing injury.

Alongside a video, she told fans: “Following medical advice, sadly I’ve had to withdraw from the @strictlycomedancinglive due to injury.

I had hoped for one last dance with Kai

“I had hoped for one last dance with @kaiwidd & we were both so looking forward to finally showing you our (unseen) show dance, but it turns out I can’t go straight from wearing a medical moonboot to performing in 37 shows in 3 inch heels. Who knew?!

“The good news is, Kai and the rest of my Strictly fam will be setting the stage on fire and and I can’t wait to go cheer them all on.”

The pair were set to perform their unseen showdance during the show’s 64 date tour.

Instead, Kai will perform with former Strictly finalist Maisie Smith.

AJ’s celebrity pals rushed to support her on the post.

Janette Manrara added: “All my love @ajodudu. We will miss you shining on that stage, but your getting better ASAP is of utmost priority.”

Giovanna Fletcher shared: “Oh mate!!!! Sending you so so so so much love!!!”

In addition, Strictly pro Jowita Przystał said: “Sending you all my love darling!!!”

AJ hopes to join the tour ‘at some point’

However, AJ is optimistic that she will join the tour at some point.

“I’m sad that I’m not going to be reunited with my Strictly pals, but go and enjoy the show,” she explained in her video.

“It’s going to be such a fun show and I’ll be there with bells at some point. Probably in February around my birthday because I’ll be out of this boot!”

Meanwhile, AJ was previously left devastated after an ankle injury forced her out of the competition.

After confirming her exit from the show, she said: “We’re gutted because we were ready to smash it. This isn’t the way we wanted to go out obviously.”

Kai also broke down in tears as highlights from their Strictly journey played out on It Takes Two.