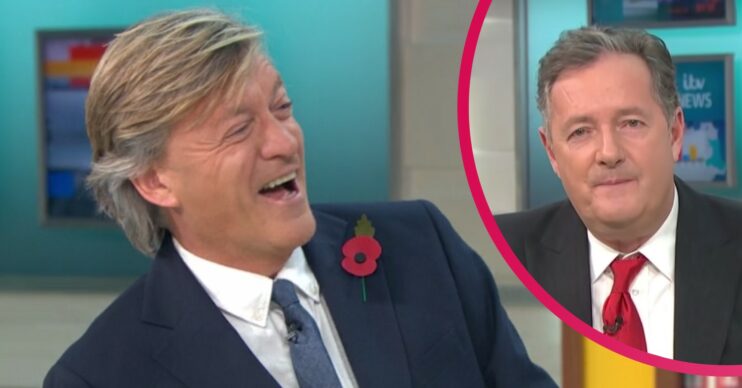 Swerved commenting on whether he'd be hosting full time

Richard Madeley kept it uncharacteristically tight-lipped when quizzed about tabloid reports concerning his GMB future on the show today (November 3).

The Sun claims the former This Morning presenter, 65, will step into the host’s role once filled by Piers Morgan permanently.

However, Richard, co-host Susanna Reid and their other guests avoided mentioning Piers’ name at all when the subject came up.

Instead, both Richard and Susanna chuckled over the reports, joking they were unable to “confirm or deny” the claims.

What has been said about Richard Madeley and his future on GMB?

The tabloid has reported that Richard will replace Piers Morgan “full-time”.

The newspaper claims he is finalising a deal said to be worth around £300,000 a year.

It is also reported Richard’s new gig will kick in after a stint on I’m A Celebrity.

Furthermore, it is claimed that insiders reckon his guest host appearances have been “a hit”.

A source is quoted as saying: “Richard has always maintained he would never do GMB full-time, as he loves his life as it is.

“But as the weeks have gone by, and he’s proven a constant hit with viewers, he’s really got into his stride and has been enjoying it more and more.

I will be doing the show down the line, along with lots of other people.

“After a couple of meetings with ITV bosses, he was offered a staff contract. And after consulting with his family, especially wife Judy, he decided ‘sod it’ — and to go for it.”

Additionally, I’m A Celebrity is reportedly regarded as the “perfect launch pad” for the new job.

How did Richard and Susanna Reid react to the claims?

Guest Andrew Pierce asked Richard just before an ad break earlier today whether he should offer him congratulations on “becoming the new Mr Susanna Reid”.

But both Richard and Susanna swerved the question, chuckling they could “neither confirm nor deny” the report.

“I think someone’s put two and two together and got four and a half,” Richard joked.

He continued: “I will be doing the show down the line, along with lots of other people.”

A representative for Richard told Mirror Online: “Richard is part of a revolving family of presenters and no plans to change that.”

They reportedly refused to comment on the permanent contract.

How did fans react to the reports?

Initial reactions on Twitter seemed to suggest viewers’ opinions did not tally up with GMB’s popularity polls.

One Twitter user wrote: “According to reports Richard Madeley is replacing Piers on #GMB Why? He is awful and not watchable.”

“I am surprised that Richard Madeley has been hired as the permanent host of #GMB,” tweeted another person.

“There isn’t much love for him on here.”

And another viewer declared: “I’m out! Richard Madeley presenting #GMB full time is not for me.”