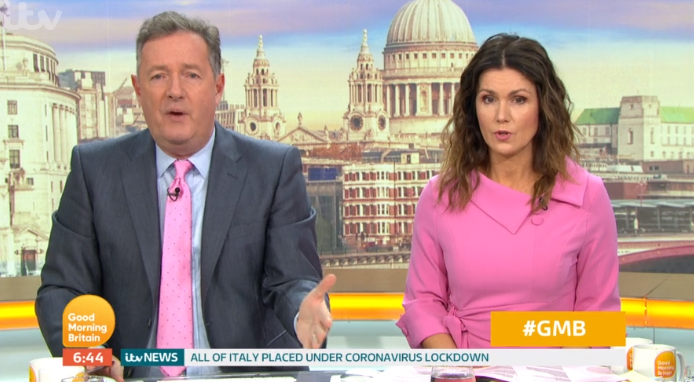 He thinks Meghan 'got what she wanted'

TV’s Piers Morgan has expressed concerns for the Queen as he took aim at Meghan and Harry before they step down from royal life.

On Monday, the Duke and Duchess of Sussex attended their final official engagement before they quit their roles as senior royals on March 31.

Speaking on Tuesday morning’s Good Morning Britain, Piers said: “Susanna [Reid], I know you always see the good in them but a lot of the tension is because they’ve been holding the royal family to ransom.

“They’ve been holding the Queen to ransom. A lot of William’s irritation and the other senior royals is the way these two have been trying to lay down the law to the Queen.

She’s spent the last few days like a Cheshire cat. She’s got everything she wanted.

“This obsession we have with ‘are Meghan and Harry okay?’ They’re fine. They’re going off to Canada and Hollywood to be superstars and to make hundreds of millions of dollars.

“But the royal family has to carry on. They have to fill the gaps and do all the work they were doing.”

He continued: “I bet the Queen has not been okay. She’s got her 98-year-old husband who has been seriously ill. And she’s got her grandsons at war.

“People say, ‘is poor Meghan OK?’ but she looks fine to me. She’s spent the last few days like a Cheshire cat. She’s got everything she wanted.

“But what about the Queen. I want to ask, ‘are you OK Her Majesty?’ I think she’s had a horrible year and it’s not been helped, in my view, by this quite selfish conduct by some of the younger ones.”

He also spoke about the ‘tension’ between brothers Harry and Prince William.

Piers continued: “You talk about self-isolation. The body language between the royals, particularly the fab four in the Abbey yesterday, my God. It was ice cold.

“A sort of half grin by Harry and apparently all William said to him the entire time was ‘hello Harry’. Not even a fake handshake.

“What would Diana make of that? What would she make of her two boys as such war now that they can barely even be civilised with each other in a public place like that knowing the cameras are there. What the hell is going on behind the scenes?”