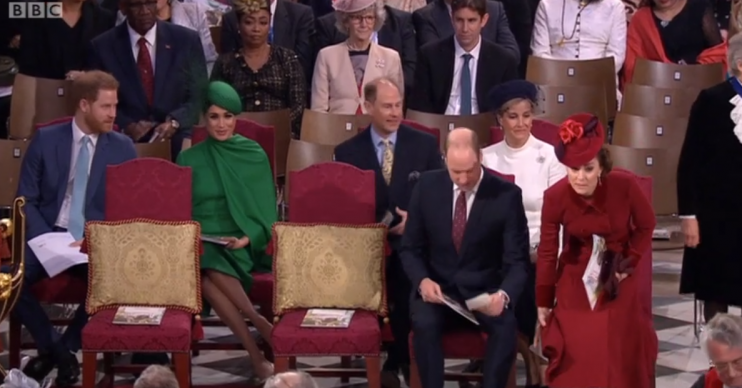 It was Meghan and Harry's final official engagement

Members of the royal family attended the service, including Prince Charles, Duchess of Cornwall and the Queen, at Westminster Abbey on Monday afternoon.

This was Meghan and Harry’s final official engagement before they step down from their roles as senior royals on March 31.

They arrived at Westminster Abbey shortly before Prince William and Kate as they greeted the crowds.

Why didn’t William and Kate greet Harry and Meghan back?

In coverage on the BBC, Meghan is seen giving the couple a wave and a ‘hello’ alongside Harry.

But viewers claim William and Kate appeared to sit down without waving or saying hello back.

Sharing a video of the moment to Twitter, one person wrote: “Meghan is too gracious to smile to him they really pretend to not see them like the disrespect but I am happy because it shows what we know about the Cambridges.”

Another said: “Wow Meghan said hi and I don’t think they returned the favour wow.”

A third tweeted: “Why didn’t William and Kate greet Harry and Meghan back? Why are those two so rude?”

Wow Meghan said hi and I don’t think they returned the favor wow !!

Why didn’t William and Kate greet Harry and Meghan back? Why are those two so rude?

In the footage, it seems the couples did briefly acknowledge each other as they sat down.