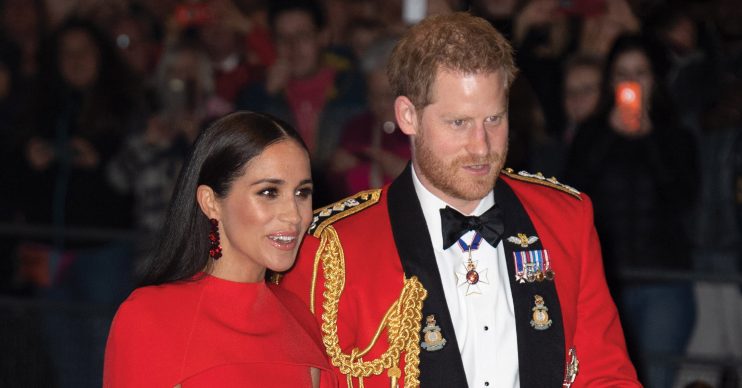 The Duchess of Sussex dazzled on Saturday night as she donned a spectacular floor-length red gown.

It was a bittersweet night for Prince Harry and Meghan Markle as they attended the prestigious Mountbatten Festival of Music at the Royal Albert Hall.

Harry, 35, and Meghan, 38, received a long standing ovation and it is believed to be the last time Harry will wear his Royal Navy officer’s uniform.

This is Harry’s last time appearing in public as Captain General of the Royal Marines, after announcing he and wife Meghan would be stepping down from their senior royal duties in January of the year.

Harry wore his red mess dress uniform donned with medals he received from his two tours of Afghanistan.

Read more: The Queen vows to carry on duties despite coronavirus outbreak

The concert was to mark the end of the Second World War and the formation of the Commandos.

This is one of their last official royal appearances

Before the crowd sang the National Anthem, Harry and Meghan received roaring applause.

During the interval of the show, in which classics such as Somewhere Over the Rainbow and the Gladiator film theme were played, the royal couple mingled with performers and military personnel backstage.

Walking hand in hand, they appeared to be as much in love as ever.

The event marked one of the last for them both as senior royals. Officially ending their royal duties at the end of this month, they will also be attending the royal Commonwealth Day service later today.

The pair have relocated to Vancouver Island, Canada, with their ten-month old son Archie and have since announced that they intend to finance their own way in life and no longer receive royal funding.

To date they have embarked on several enterprising pursuits. Meghan is believed to have signed up to do voice work for Disney, in which a donation to charity is said to be made.

She is also rumoured to be eyeing up roles in Hollywood movies, and is reportedly particularly interested in appearing in a big budget superhero movie.

Harry meanwhile has spoken at a J P Morgan wealth summit about the importance of mental health awareness and admitted that he had been in therapy himself for several years.

What do you think of Harry and Meghan’s appearance? Share your thoughts with us on our Facebook page @EntertainmentDailyFix.