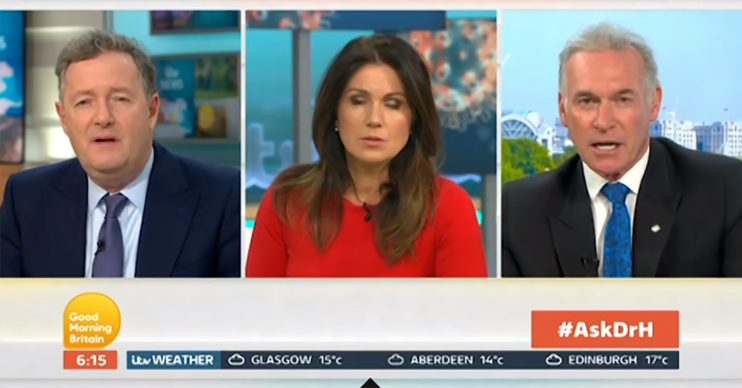 The pair disagreed over what the government has got right

TV’s Piers Morgan and Dr Hilary Jones clashed again in an awkward exchange about what the government has done right during the coronavirus crisis.

Discussing the situation on Good Morning Britain, Piers wanted to know ‘just one thing’ that the government was ahead of the game with since the outbreak of the virus rather than being ‘two months behind’.

While Dr Hilary did admit he had to think ‘long and hard’ about that, he came out in defence of the government with Piers hitting back immediately.

“Is there one thing you can tell me that our government’s experts did before anybody else, successfully?” Piers asked.

Dr Hilary started off by laughing but Piers insisted he was being serious, asking the question again.

“I’ve been thinking long and hard about that,” Dr Hilary replied.

Read more: Dr Hilary forced to ‘fix his own tooth’ during lockdown

Piers interrupted him, asking: “Name one thing where we were ahead of the game rather than two months behind.”

“Our NHS,” Dr Hilary replied. “We just have to say in maintaining an NHS that was able to cope at the peak.”

But Piers immediately hit back with: “How did we do that? We chucked all the elderly into care homes.”

“I know,” Piers replied. “I’m just saying that the reason hospitals didn’t get run over was because we took thousands of old people out of the hospitals and we put them into care homes where they infected people.”

While Dr Hilary did agree that there had been plenty of errors during the handling of the COVID-19 pandemic such as the lack of PPE, he then became irritated about journalists and their criticisms.

He said: “There were warnings from journalists about what may happen in a pandemic. There’s a lot of complaints now about what we should have done.

“Where were the journalists asking whether we were doing enough for care homes before the event?”

“We’re not scientists or doctors,” Piers pointed out, adding: “It’s a fair question.”

Later, adding to the already simmering tensions, Piers called Dr Hilary a ‘stoic defender of the government’, to which Dr Hilary snapped back with: “I’m not a defender of anything!”