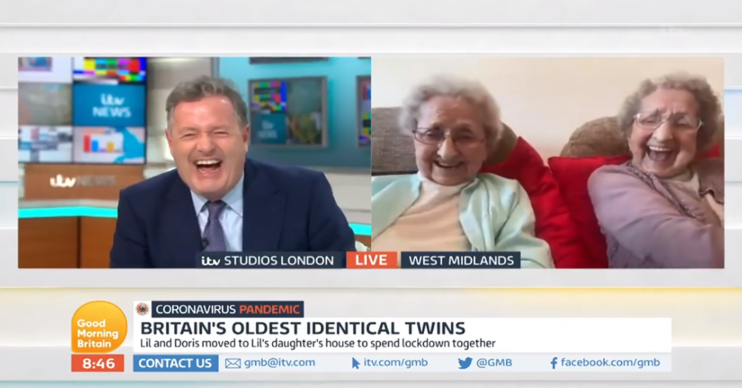 TV’s Piers Morgan met Britain’s oldest twins on today’s Good Morning Britain and they had everyone in hysterics.

95-year-old identical twins Lil and Doris from Tipton appeared on Tuesday’s show to discuss being in lockdown.

However, Lil admitted she had a crush on Piers and wasn’t shy when it came to having a little flirt.

The pair also joked that their secret to a long life is “plenty of sex”.

Piers told them: “Right you two, I want to know one thing.

“Which one of you is my fan and which one isn’t?”

What did the twins say?

Lil put her thumb up to confirm she’s a fan of Piers while Doris shouted: “Lil!”

Piers asked: “I’ll come to you in a minute, Lil. Doris, why are you not my fan?”

Piers revealed Doris and Lil were separated for four weeks at the start of the coronavirus crisis.

When asked what it was like to be apart from her sister for that long, Lil admitted: “Good,” as she laughed.

Piers asked: “Was it the best four weeks of your life, Lil?” to which she laughed.

One night with him and I would die happy.

Doris then joked she wouldn’t be cooking Lil’s dinner.

Speaking about lockdown, Doris said: “We haven’t been too bad have we? Bit boring at times.”

When asked what they would be doing if we weren’t in lockdown, Lil said: “Not a lot,” as Piers and Susanna Reid burst into laughter.

'What is the secret of living so long?'

Piers asked Doris what she would like to be doing if there wasn’t a lockdown and she said: “Sitting by you.”

Going on to discuss care homes during the coronavirus crisis, Doris said their home was “beautiful” and they were put into lockdown two weeks before they were told to do so.

However, the pair are now staying with Lil’s daughter because she wanted to take them out of the care home.

When asked what their secret is to staying well and living long, Lil pointed to her sister and joked: “Plenty of sex.”

Doris shouted: “No, no, no,” as Piers burst into hysterics as Susanna’s face looked shocked.

She said: “One night with him and I would die happy. Mind you, I’m coming on to you now.”

Piers accuses them of flirting

Piers said: “You’re flirting outrageously, both of you.”

Concluding the interview, Lil and Doris told viewers to “make the best of everything” and “show plenty of love”.

Piers asked them if they would be interested in Colonel Tom Moore, who has raised millions for the NHS.

However, Lil replied: “I want bloody thrilling not killing!”