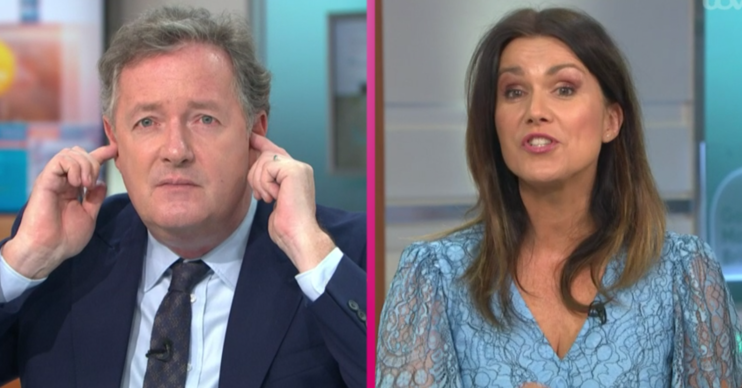 It came after he had a bizarre row with co-host Susanna Reid live on air.

The pair were discussing care minister Helen Whately at the time and her controversial comments about student nurses.

In a letter to paediatric nursing student Jess Collins, she said that student nurses were “not deemed to be providing a service”.

Following the backlash, the government has issued a statement which Susanna wanted to read out on GMB.

“We asked for an interview but no one was available,” she told viewers.

“The Department of Health though say Helen Whately’s words were taken out of context.”

As she then proceeded to read out the statement, Piers flipped out.

Interrupting Susanna, he fumed: “Sorry, why are you going to read this?

“If they can’t be bothered to come on our programme, why should we read their wishy-washy little statement?”

He added: “If they’re boycotting us, I’m going to boycott their stupid little statements. I think you should. You don’t have to read it.”

Susanna argued back, telling Piers she was interested in what the government had to say.

But Piers hit back: “Why bother. You’ just reading a PR release. If they want to defend it then they should come on and defend it.

Piers then put his fingers in his ears and refused to listen as Susanna read out the statement anyway.

Student nurse Jessica Collins who opted in to help during the coronavirus pandemic, says student nurses are providing care and taking their own patients' alongside their qualified colleagues in response to Helen Whately's comments.#GMB pic.twitter.com/xbZeWGLNbz

After she had finished, he told those tuning in at home: “Sorry, apologies to all viewers that had to listen to that claptrack.

“Honestly, why the hell should we read government statements when they can’t be bothered to come on?

“No. Sorry. Not happening. Not on my watch.”