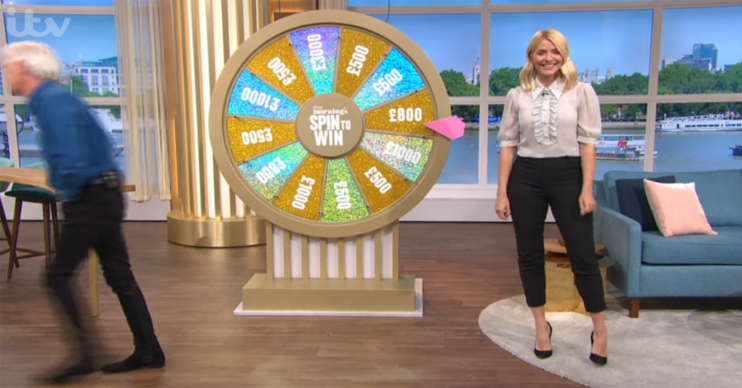 Holly got her words in a muddle in awkward mishap

TV’s Phillip Schofield pretended to storm off set when co-host Holly Willoughby made a blunder getting her words in a twist on This Morning.

The presenting duo burst into laughter as Holly got her words wrong after the Spin to Win segment.

Even though she tried to correct herself, Holly couldn’t manage to make sense of what she was saying with Phil pretending to get fed up with her and walk off set while she stood there giggling.

After Spin to Win, Holly tried to introduce what was coming up next on the show.

She began: “Right, we’re talking to Joey Essex in just a moment but before we do, another chance for you to win.”

Clearly expecting Phil to carry on where she left off, Holly then stood there in awkward silence while Phil just started laughing.

Realising her gaffe, an awkward looking Holly tried to pick up where she left off continuing with: “And there’s a prize worth over £135,000…” before collapsing into giggles.

She then gasped and covered her mouth, exclaiming: “I just read loads of numbers!” as Phil raised his eyebrows and started to walk off.

Holly then continued: “One hundred and thirty five thousand pounds up for grabs and Josie’s got all the details.”

The presenting duo then laughed some more before carrying on with the show.

It wasn’t Holly’s day today as viewers slammed her for wearing a pricey designer outfit.

Uploading her daily #HWstyle shot to Instagram, Holly revealed she was wearing a shirt and smart black pencil trousers to host the show.

The Ensor cream polka dot shirt – with frill detailing – garnered the most attention from her followers.

Morning Monday… it’s a new week… take a deep breath… we can do this… stay at home, stay safe and stay with us… @thismorning 10am 🌈. Shirt @lkbennettlondon trousers by @jcrew 🤍🖤🤍🖤

It’s from LK Bennett – where the Duchess of Cambridge gets her famous wedges – and costs £150.

“The blouse is lovely, but £150 for a polyester top? Blimey,” said one follower.

“Where are the high street clothes please?” another pleaded.

The TV host teamed the blouse with a pair of J Crew trousers costing £110.