Mancs In Mumbai: Viewers’ ‘prayers answered’ as they beg for series two after emotional finale

Fans of Absolutely India: Mancs In Mumbai may have had their prayers answered regarding series two after last night’s emotional finale.

The hit documentary series followed actor Ryan Thomas, his brothers Adam and Scott and their dad, Dougie, on an emotional rollercoaster of a journey to learn more about their Indian heritage.

The journey to continue?

Some viewers think the Thomas brothers should head to the Caribbean for the next series – if there is one – as they discovered a family connection there when speaking to relatives in Mumbai.

And taking to Twitter after the show finished, star Adam Thomas appeared to confirm plans for another series “next year”.

Adam told his followers: “What an adventure! Thanks for coming on this journey with us guys…”

What An adventure !! Thanks for coming on this journey with us guys… see you all next year 👀 #mancsinmumbai what would you like to see the thomas brothers do next ? 😉

He added, cryptically, “See you all next year” alongside a peeping eyes emoji before asking what fans want him and his brothers to do in their next outing. “What would you like to see the Thomas brothers do next?” he tweeted.

How did it end?

Last night’s episode was an emotional end to the series. And it seems one particular moment left viewers in bits.

The Thomas brothers’ dad, Dougie, left them for several years when they were younger. It’s cropped up a number of times in the series, at one point leaving Ryan sobbing as struggled to come to terms with the emotional impact of it.

See you all next year.

Towards the end of the series one finale, Dougie told his lads just how proud he is of them – and it had viewers reaching for the tissues.

Reacting on Twitter, one viewer said: “Aww I cried when Dougie said he was proud of his boys! I will miss the Indian ABBA tunes! #MancsInMumbai.”

Another wrote, alongside a crying emoji: “Highlight of tonight… that Dougie told his boys he was proud of them, its nice to hear, gutted its finished.”

Read more: Bradley Walsh: Happy 60th Birthday viewers stunned at how much son Barney looks like a younger him

A third joked, using a crying GIF: “Literally me by the end of every episode of #mancsinmumbai.”

Aww I cried when Dougie said he was proud of his boys! I will miss the Indian ABBA tunes! #MancsInMumbai 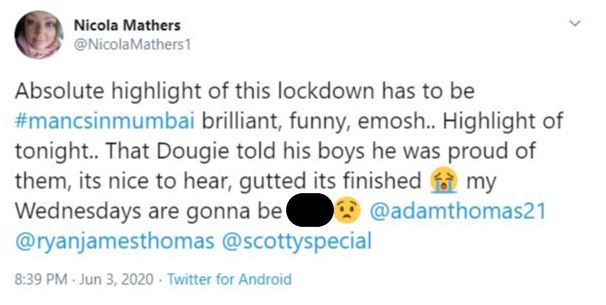 Literally me by the end of every episode of #mancsinmumbai pic.twitter.com/ARV2mARMsE

Did you enjoy Mancs In Mumbai? Leave us a comment on our Facebook page @EntertainmentDailyFix and let us know what you thought of the series.