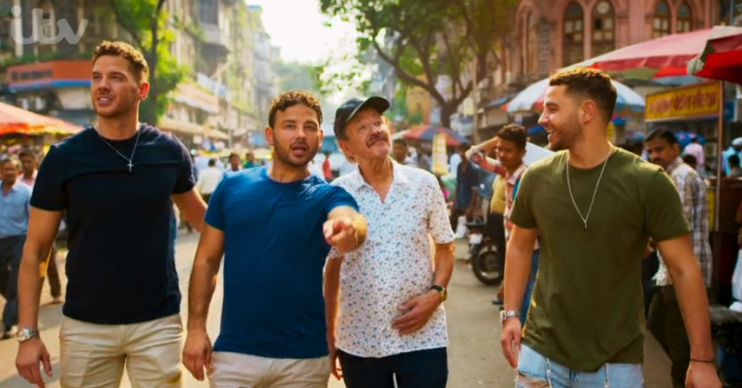 A follow-up to their hit reality show?

Actor Adam Thomas and his brothers Ryan and Scott have teased the prospect of following up Absolutely India: Mancs In Mumbai with a film shot in India.

The trio hinted at possible plans to create a movie on the back of the success of their ITV reality series.

During an interview on today’s (Wednesday, May 20) Lorraine segment on Good Morning Britain, Adam revealed they could well end up shooting a film.

What did Adam Thomas say on Lorraine?

Lorraine Kelly asked if they would do Bollywood movies. Adam said: “I don’t know about that. Listen, I’d love to go out there again.

“To go to Bollywood and go back to Mumbai. Any chance we get to go back there… and especially to do a film out there? You never know, Lorraine! Watch this space.”

Elsewhere in the interview, Ryan had Lorraine in stitches as he showed off baby Roman on camera today – and the tot was covered in poo!

The four of them talked about the coronavirus lockdown and how it had prevented everyone from seeing their loved ones.

Adam and Scott appeared to be feeling this particularly keenly. Their big brother, Ryan, only recently welcomed a son with his fiancée, Lucy Mecklenburgh.

Lorraine said to Adam and Scott: “Now, one of the things about lockdown which is a real shame, is that that you haven’t seen your baby nephew.”

Scott replied: “I know, absolutely gutted. But you know what, we stay in touch so much… when we finally meet Roman, it’s going to be a very special day.”

“Awww so cute,” Lorraine gushed, as the tot came into view with his mum. “You look so well, and your baby’s gorgeous,” she told Lucy.

Grinning, Ryan said: “We put him in his best outfit today and, just for you, on camera…”

Ryan then held Roman up, to show that his nappy had leaked poo up his back.

The Thomas brothers’ TV show, Mancs In Mumbai, has been a hit with ITV viewers so far.

Starring all three of them alongside their dad, Dougie, it charts their journey through the streets of India’s biggest city. There, they meet relatives and learn more about their heritage.

– Absolutely India: Mancs In Mumbai continues tonight (Wednesday, May 20) at 8pm on ITV