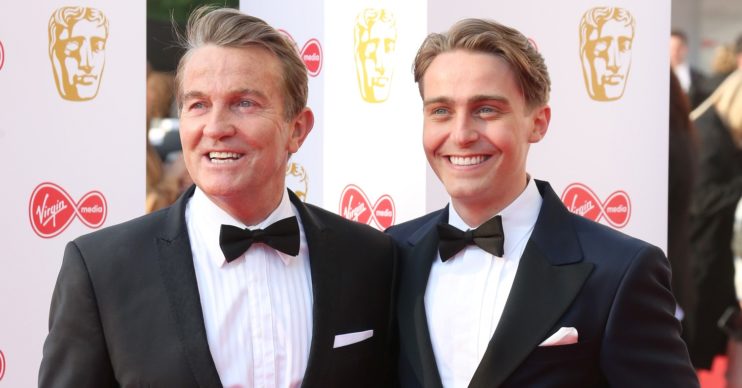 Presenter and host of The Chase Bradley Walsh turned 60 this week and to mark the occasion, ITV aired a special programme celebrating his long career in entertainment.

But viewers at home couldn’t help noticing one thing about The Chase host when he was younger.

Many were stunned at how much Bradley’s son, Barney, looks like his dad when he was a young man.

Fans are well acquainted with Barney, as he co-stars alongside Brad in their road trip show, Breaking Dad.

Reacting to the likeness on Twitter, one viewer said: “#BradleyWalsh omg love you, how much does Barney look like you when you were younger xx.”

Another said: “Young #BradleyWalsh is the absolute double of son Barney.”

A third wrote: “@BradleyWalsh is the double of Barney when he was younger!!! #BradleyWalsh @ITV #bradleywalsh60.”

Someone else tweeted: “Barney looks the absolute spit of Bradley when he was younger! @ITV #BradleyWalsh.”

#BradleyWalsh omg love you, how much does Barney look like you when you were younger xx

Young #BradleyWalsh is the absolute double of son Barney

Barney looks the absolute spit of Bradley when he was younger! @ITV #BradleyWalsh

Bradley is currently on screens every weekday evening at 5pm for episodes of The Chase on ITV.

Luckily for fans, they’re about to be treated to a whole lot more of him in the coming weeks.

Breaking Dad back on

Now that Absolutely India: Mancs In Mumbai has come to an end, ITV is filling the gap in the schedule with a special series of Breaking Dad.

The series will combine their adventures from both series one and two. It will also feature an extra episode made up of previously unseen footage and outtakes from both trips.

Read more: Bradley Walsh reveals he’s put on a stone in lockdown and is the ‘heaviest’ he’s ‘ever been’

In the first series of Breaking Dad, Bradders and Barney start out in Los Angeles and make their way through Arizona and Texas to New Orleans.

In the second series, they travel up the eastern half of the United States, beginning in Florida and passing through Kentucky, Vermont and other states.