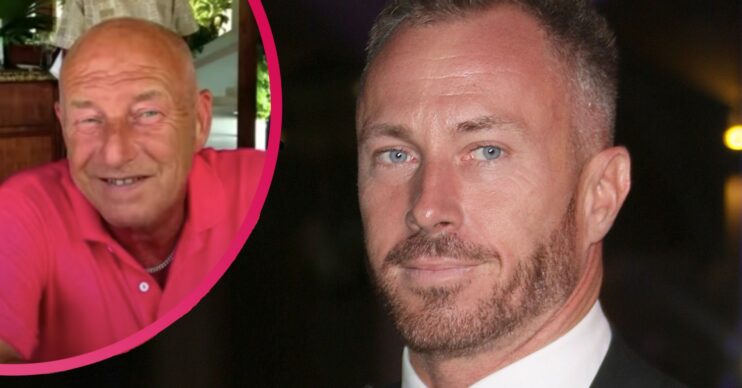 James Jordan has admitted he cried over his father Allen’s death daily for a year.

The former Strictly Come Dancing star said it has been the “worst thing” he has ever experienced.

James, 43, said his began grieving the moment it was discovered his dad’s cancer was terminal.

He and his family sadly buried Allen in April this year and James says he still gets upset “every day”.

James Jordan speaks about his grief

Speaking on ITV1’s Loose Women, James said: “I think I started grieving the day I found out he was going to die, so I was grieving for about a year.

“Then obviously we lost him and then you start grieving again.

“It’s the worst thing I’ve ever been through.”

He added: “I cried pretty much every day for a year. And I have no shame in saying that. My dad was one of my closest friends and I’ll miss him every day.

“I don’t think it’s ever going to go, maybe it just gets less painful, I hope. But every day, even now, I still think about it and still get upset.”

The professional dancer said that doctors first diagnosed his father with a stroke after he began experiencing seizures.

However, in July last year, James confirmed that Allen had been told he had an inoperable brain tumour.

At the time, the dad-of-one said it was “the news we’ve been dreading”.

James continued on social media: “We have been told that it’s not advisable to operate because of where the tumour is and wouldn’t actually make that much difference even if they could. The end result is, it’s terminal.

“They are saying with chemotherapy and radiotherapy we might be lucky and get a year with him.

“As I write this tears are streaming down my face as I’m sure many of you have the same love for your parents.”

Due to the coronavirus pandemic, James was often unable to visit Allen in hospital.

He died in March this year, with James confirming: “My dad became an angel at 8:05am. I will forever miss him. My dad will always be my HERO. RIP daddy.”

The pair joined panelists Coleen Nolan and Denise Welch in a discussion about grief and ‘masculine grief’.

Speaking further about Allen’s death, James said: “I wouldn’t wish it on anyone but unfortunately it happens to many, many people. It’s going to happen to everyone at some stage.

“As my dad would say, unfortunately it’s part of life and he wouldn’t want me to be the way I was six months ago.

“I think that’s part of the reason why I can at least talk about it now, as six months ago I’d literally be in tears because it’s so hard and so raw.”