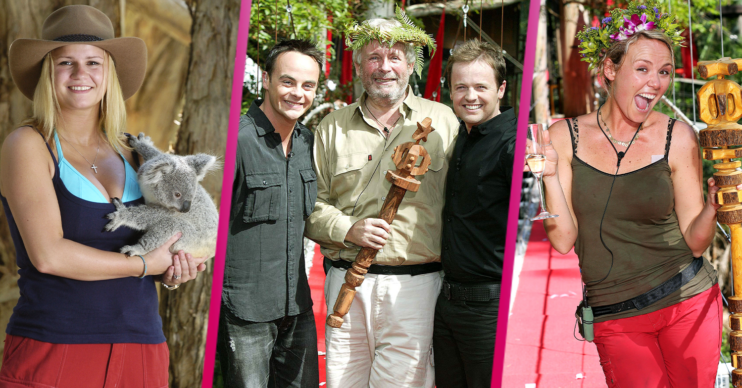 I’m a Celebrity winners: All the winners in the show’s 20-year history

I’m a Celebrity has crowned 20 winners over the years, but can you remember them all?

Kings and Queens, the castle or the jungle, they’ve captured our hearts and won our votes.

I’m a Celebrity winners: The very first show back in 2002

The show – fronted by Ant McPartlin and Declan Donnelly – burst onto our screens in 2002.

Darren Day, Tara Palmer-Tomkinson and Christine Hamilton all made their mark.

But it was DJ Tony Blackburn who was crowned the very first King of the Jungle.

After the success of the first series, I’m a Celebrity returned to the Australian jungle the following year.

Danniella Westbrook raised eyebrows when she left the show on day nine.

She’d previously threatened to leave twice, with her fellow campmates persuading her to stay.

One person who did stay the distance though was cricketer Phil Tufnell.

He was crowned series two champion in a series that also saw appearances from Wayne Sleep and Linda Barker.

I’m a Celebrity fans were treated to not one but two series in 2004.

Romance blossomed for Katie Price and Peter Andre when they met in the Australian jungle in January 2004.

However, the public only had eyes for Kerry Katona, who was crowned the Queen of the Jungle.

In December of that same year, another batch of celebrities arrived in the jungle.

Loose Women star Janet Street-Porter was among them, as was Natalia Appleton, who was seemingly afraid of absolutely everything!

Comic Joe Pasquale won over the public, though, emerging victorious just before Christmas.

ITV went back to the tried-and-tested one show a year in 2005.

Sid Owen and double act Cannon and Ball appeared, but it was Carol Thatcher who was named the winner.

By far one of the most-talked-about moments in I’m a Celebrity history came in the 2006 series.

Viewers watched – and went wild – as she used the jungle shower wearing just her white bikini.

However, it wasn’t enough to see Myleene named Queen of the Jungle.

The headlines were all about EastEnders star Marc Bannerman and Catatonia star Cerys Matthews, who grew close in the jungle.

Cerys was single having split from husband Seth Riddle before entering the jungle, but Marc was with long-term girlfriend Sarah Matravers.

And, while nothing happened between the pair during filming, Sarah fled Australia when she saw them getting close.

Cerys and Marc went onto have a short-lived romance after the cameras stopped rolling.

Christopher Biggins went on to win the series.

Father-of-three Joe Swash won the nation’s hearts and was crowned King of the Jungle back in 2008.

Although we reckon he’d say the biggest prize came a fews years later when, thanks to I’m a Celeb, he met the lovely Stacey Solomon.

This Morning chef Gino D’Acampo was named King of the Jungle in 2009.

He was in camp with the rather outspoken Kim Woodburn, who seemed to clash with everyone about everything!

Stacey Solomon and Alison Hammond provided the laughs for the 2010 series, while Gillian McKeith more than provided the drama.

Anyone remember that live trial where she “fainted”?!

Down-to-earth Stace was crowned Queen and met her King – Joe Swash – on the set of Extra Camp that year.

Mark Wright and Sinitta were his jungle buddies.

EastEnders villain Charlie Brooks won the public over as she stepped away from evil Janie Butcher.

She was crowned Queen of the Jungle, after going up against Corrie star Helen Flanagan and Pussycat Doll Ashley Roberts.

This Morning pundit Matthew Wright was one of the jungle stars in the 2013 series.

Sadly, he didn’t win over the public – much like when he’s on with Holly and Phil!

Westlife heartthrob Kian Egan did, though, emerging from camp victorious.

The GC enters the jungle

The 2014 series, although not won by Gemma Collins, certainly made headlines because of her.

She refused to parachute into camp with the rest of the celebs and withdrew just 72 hours after eventually entering, citing health reasons.

Carl Fogarty went on to win.

The friendship between Vicky Pattison and Ferne McCann was one of the most special things about the 2015 series.

The girls had each other’s backs no matter what.

Although Vicky eventually won the show, you could argued that both ladies did well out of their appearances.

As well as making a friend of life, they went on to appear on TV together numerous times.

A triple whammy of stars emerged victorious in 2016.

It might have been short-lived, but we loved it!

Jack Maynard made headline news in the 2017 series but not in a good way.

He was turfed out by ITV after just three days after historic tweets painted him in a bad light.

His jungle buddy Georgia Toffolo won the show – and a This Morning contract.

Perhaps one of the best series yet, 2018 saw Harry Redknapp crowned King of the Jungle.

Viewers loved his name-dropping tales and his enduring love for wife Sandra.

John Barrowman, Emily Atack and Fleur East were his campmates.

The nation got to know the lovely Kate Garraway away from the GMB news desk as she signed up for the 2019 series.

Husband Derek and their kids were on hand for support, but it wasn’t enough to win her the jungle crown.

I’m a Celebrity winners: The first trip to Wales in 2020

In the midst of the pandemic I’m a Celebrity provided the winter cheer we all needed.

Except, perhaps, for the celebs, of course, who were holed up in a draughty Welsh castle.

Giovanna Fletcher won it, but Jordan North won our hearts!

Will you be tuning into I’m a Celebrity this year? Tell us on our Facebook page @EntertainmentDailyFix.