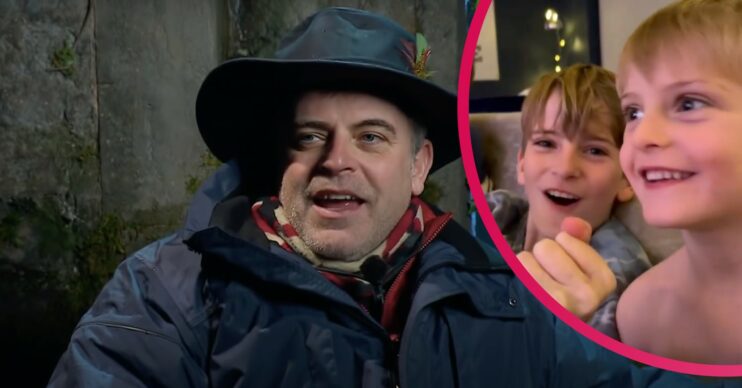 The sons of I’m A Celebrity star Simon Gregson had an adorable reaction to the news that their dad had been saved from the public vote.

The first celebrity was evicted from Gwrych Castle last night (Sunday, December 5) – and Simon’s sons were over the moon that it wasn’t him.

What happens in Simon Gregson’s video?

The short video containing his sons’ adorable reactions was posted on Simon’s Instagram account last night for his 14,600 followers to see.

Dec Donnelly can be heard revealing who is safe from elimination. “In no particular order, Simon…”

“It’s not you,” Henry says, covering his mouth, his eyes glued to the screen. The brothers hold their breath in anticipation before Dec says: “It’s not you.”

The boys and mum, Emma, then cheer as Simon lives to see another day in the castle.

“Come on!” Harry shouts, before Henry, adorably, says, “Thank you”, to the viewers who voted to keep Simon safe.

What did the soap star’s followers say about the video?

Simon’s followers were bowled over by the cute video and took to the comments to show their support for the Coronation Street star and his kids.

“No chance your daddy be going home soon,” one fan wrote. “David [Ginola] may be a legend, but your daddy is a king!!!”

“Aww so cute!” another of Simon Gregson’s fans said.

“Bless his [Henry] little heart. Daddy will always get my vote. Simon to win,” another of Simon’s followers commented.

Ultimately it was Dame Arlene Phillips who was eliminated last night. The former Strictly Come Dancing judge was the oldest contestant in the show’s history at 78 and was the first celebrity to be voted off the show this year.

What else has Simon Gregson been up to on the show?

It remains to be seen whether Simon’s sons were as happy with their daddy’s antics the other day, though. The soap star was involved in a scandal within Gwrych Castle last Thursday (December 2) as it emerged that he’d sneaked contraband into camp.

The 47-year-old actor had managed to sneak some salt and pepper into the camp, which is against the rules. The star was caught sprinkling the seasoning on some sausages campmates had won in that day’s challenge.

Simon wasn’t very remorseful when confessing to his crime though.

You can catch Simon Gregson on I’m A Celebrity tonight at 9pm on ITV and ITV Hub.

What did you think of Simon’s sons’ reactions? Head to our Facebook page @EntertainmentDailyFix and let us know!