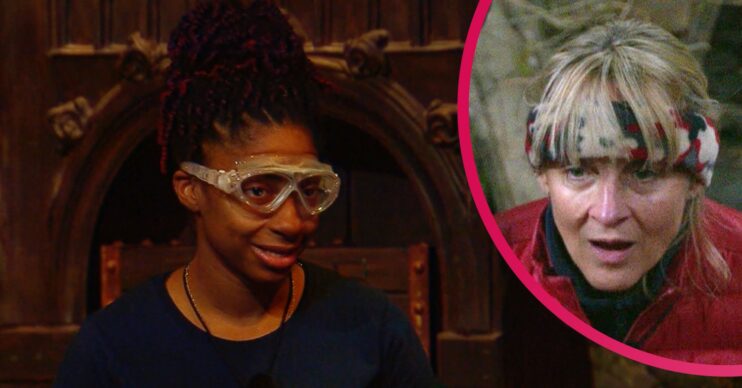 A preview clip from I’m A Celebrity tonight shows Kadeena Cox dumping a box of bugs all over Louise Minchin‘s head!

The 53-year-old presenter is lying down in a contraption on the floor as the Paralympic athlete covers her in castle critters.

What happens on I’m A Celebrity tonight?

Louise Minchin and Kadeena Cox are set to team up in tonight’s I’m A Celebrity. A preview clip shows the stars working together on the Critter-cal Cages challenge.

Louise is locked in a large coffin-shaped trap on the castle floor in the preview clip. As the klaxon blows, Kadeena races into a tall cage full of snakes.

“Hello, my little friendies, how are we?” Kadeena asks the snakes as she enters their cage. The 30-year-old Paralympic star then unties a key from a rope that’s in the middle of some snakes.

“That’s it, nice and calm and slow, well done,” Dec says as Kadeena gets the key.

Kadeena then hurries over to some shelves which have a number of boxes on them, which have heavy-looking padlocks.

“Box number one, what have you gone for?” Ant asks.

“Sixteen,” Kadeena replies as she unlocks the padlock. The celebrity then removes the box from the shelves and carries it over to Louise’s contraption. She then places it above a gap in the contraption that is, conveniently, right above Louise’s head.

“Right, let’s see if there’s a star in this one,” Dec says. Then Kadeena opens the bottom of the box.

What else happens with Kadeena and Louise in the I’m A Celebrity challenge?

Bugs fall out of the box and land on Louise’s head, causing the ex-BBC Breakfast presenter to yelp in surprise.

“Star!” Kadeena shouts as a gold star lands on Louise, along with hundreds of horrible-looking castle critters.

“Oh, well done!” Dec says. “One out of one, get that in your star bag!” Kadeena then hurries back over to the snake cage to grab another key.

“Cockroaches in there with you,” Ant says to Louise.

“Sorry cockroaches,” Louise whimpers as they crawl over her.

Read more: I’m A Celebrity star Danny Miller told to ‘give it a rest’ as he crushes over David Ginola

Louise and Kadeena’s involvement in the trial makes a change for campmates and viewers alike. Music producer Naughty Boy has been involved in seven challenges already in this series, with the public voting for him continuously.

Last night, Naughty Boy and Matty Lee took part in the Gross Vegas challenge. Matty and Naughty had to take part in Vegas-themed games. The duo had to eat turkey testicles and have bugs dumped on them during the trial.

They managed to walk away with six stars out of a possible 11.

You can catch Kadeena and Louise’s trial tonight (Monday, December 6) on I’m A Celebrity at 9pm on ITV and ITV Hub.

Will you be watching I’m A Celebrity tonight? Head to our Facebook page @EntertainmentDailyFix and let us know!