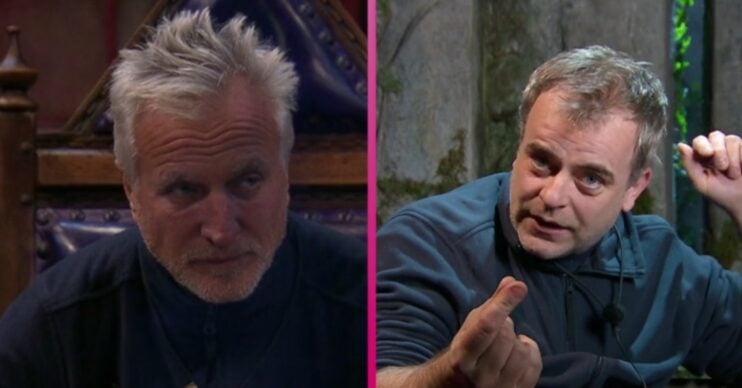 Who knew a 'tiny' amount of salt and pepper could cause so much drama?!

I’m A Celebrity star David Ginola has warned Simon Gregson about breaking the rules after Simon was caught sneaking ‘contraband’ into camp.

The Coronation Street actor was caught red-handed… with some seasoning!

There are a number of items I’m A Celebrity’s campmates can’t take into camp. Some items that have previously been banned on the show include pillows, makeup, and cycling shorts. Also on the list is some seasoning.

Simon was caught by camp leader David with the contraband last night, and the former French football star wasn’t impressed.

Following Naughty Boy and Frankie Bridge‘s trial triumph, where they won 10 stars, the campmates were rewarded with some venison sausages.

Simon, 47, then sneakily added some salt and pepper to the sausages as they were cooking. Clearly, he wasn’t sneaky enough, as David caught him in the act!

What happened with David Ginola and Simon Gregson on I’m A Celebrity?

“It’s just sage,” Simon lied to the camp leader, but David wasn’t having any of it.

Simon was insistent it was just sage. Until he went to speak in the Telegraph, that is.

“I smuggled in a tiny amount of salt and pepper in the toothpaste tube,” the soap star admitted. “I put on a very tiny amount onto the dinner. To therefore lift the mood of the fellow campmates.”

“The food is terrible!” Simon cried, defending his decision to sneak in contraband. “Absolutely god-awful!”

“And I was completely driven to this minuscule, hardly worth noticing crime,” he said. “In many ways, I’m a hero.”

What else did Simon say?

David warned: “Be careful, the walls have ears,” but in a camp continually monitored by cameras, it was already far, far too late for Simon and his seasoning.

Read more: I’m A Celebrity: Frankie Bridge fans concerned for her during trial

At the end of the show, I’m A Celebrity hosts Ant and Dec revealed there would be “consequences” for Simon’s actions.

“Let’s charge them with a salt. A salt and peppery,” Ant joked.

Simon isn’t the first contestant to try and sneak in a banned item. Naughty Boy tried to sneak some spices into the castle too during the first few days but was caught out.

What do you think Simon’s punishment should be? Head to our Facebook page @EntertainmentDailyFix and let us know!