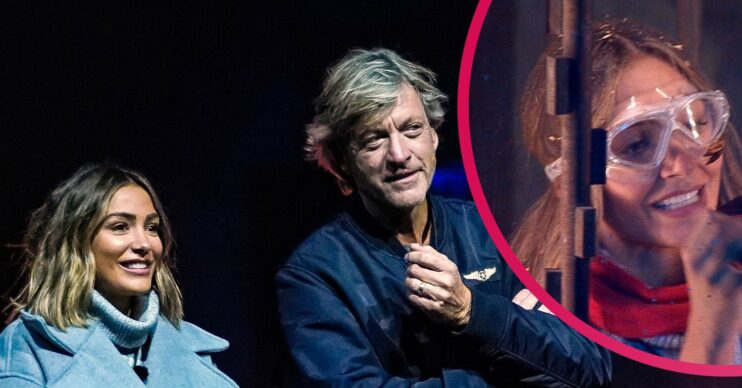 They will compete in Turrets of Terror

I’m A Celebrity has revealed a first look at tonight’s trial, Turrets of Terror.

It’s no surprise that the public have voted for Richard Madeley to take part. But they’ve also chosen Frankie Bridge to go against him.

What happens in Turrets of Terror?

After their fellow campmates have been split into teams of four and faced off against each other in challenges throughout the day, everything comes down to this final task.

The Turrets of Terror are a huge three-level structure in front of Gwyrch Castle.

Ant and Dec are waiting for the celebrities as they arrive and tell them everything comes down to this trial.

The public have been voting and it’s revealed they chose Richard and Frankie to participate. The pair then join everyone else to cheers from their teammates.

The winning team so far get to choose between Frankie or Richard to represent them whilst the other will play for the other team.

The aim of the trial is to get hold of a giant key hanging between the two turrets.

There are stairs inside leading up the three levels of the turrets and to get to the next level the contestants must get through a locked gate.

They have to retrieve keys to open padlocks. Once they get to the roof, they have to get their final key using a lance.

Of course, as it’s a trial, they won’t be alone. And indeed, it’s not long before Richard and Frankie are covered in critters.

But who will win?

What else happens in the first episode?

The first eight celebrities are split into teams of four.

Danny Miller, Louise Minchin, Snoochie Shy and Naughty Boy face huge heights in a helicopter and then walking the plank.

Meanwhile, David Ginola, Kadeena Cox, Arlene Phillips and Matty Lee are all driven to a stately home in the Welsh mountains, but it’s not luxury for long as they are put straight into a helicopter too.

Danny is scared immediately, saying: “The idea of getting in that helicopter terrifies the life out of me. The last thing I want to do is be sick all over the celebrities.”

But that’s nothing compared to what they are flown to: a plank over a quarry.

Ant and Dec arrive to join them shortly afterwards and tell them what will be happening.

“This year is going to be tougher than ever, all the celebrities will face grueling challenges on their way to the castle to win the keys to the Castle,” reveals Ant.

Dec continues: “The winning team will get to pick which two celebrities from the other group will represent them in the next challenge.”

“The team that wins the keys will have access to main camp in the Castle, where you will get a bed, a warm fire and you will eat tonight,” says Ant.

“Whilst the losers will be banished to the Castle Clink and be on basic rations. Not the place you want to be.”

The contestants have to make their way out over the two planks then whoever taps their green light when it flashes first will win. The other celebrity will be dropped from their plank.

Who will be the quickest to press their green button?

Elsewhere, David, Arlene, Matty and Kadeena are in the Welsh forest battling against each other. They have to lie on the ground and put their hands into hell holes and unlock flares in the quickest time.

Read more: I’m A Celebrity: plush hotel where Ant and Dec are staying

I’m A Celebrity…Get Me Out Of Here! Sunday 21st November at 9pm on ITV & ITV Hub