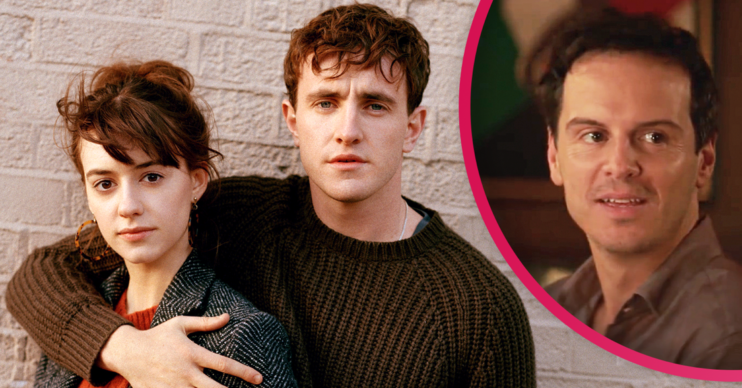 Andrew Scott stars in a hilarious sketch for the Irish version of Comic Relief.

The ‘Hot Priest’ from BBC’s mega-hit Fleabag has returned to our screens.

Andrew Scott, who played the sexy character, has reprised his role for the Irish version of Comic Relief.

And his return involves a unique and unexpected crossover with the main characters from Normal People.

Crated in aid of RTÉ Does Comic Relief, Paul and Daisy reprise their roles of Connell and Marianne respectfully.

They take themselves to church to confess their sins. And their priest is none other than ‘Hot Priest’ from Fleabag.

As he tells ‘Hot Priest’ his love problems, he is surprised when he says he can completely relate.

Read more: Ant and Dec surprise little boy who has raised over £1 million for charity

The man of the cloth goes on to describe how he is also tortured by love – despite having taken a vow of celibacy.

Then Daisy shows up at the other side of the confessional box to confess her own sins.

She adds: “Just so you know I don’t actually believe in the concept of sin.”

But regardless she goes on to admit she stole Connell’s chain.

Connell, listening intently, is shocked but peace is eventually resolved.

“I don’t actually believe in the concept of sin”

The three of them break into a rendition of the classic Boyzone hit: Baby Can I Hold You.

Read more: Parents will be fined if they don’t send their children to school in September

And in a second video Connell and Marianne are imagined 40 years from now.

The two bicker after Connell makes her cheese on toast in a sketch called Older Normal People.

But the clip ends in them confessing that they “suppose” they still love one another.

He told RTÉ Radio 1: “There’s a beautiful piece called Normal Older People, which is imagining what would have happened to Marianne and Connell 40 years from now.

“I promise you, these are two very special bits.

“It’s so much better than anything we’ve ever made. I mean I can’t even say all about it because there’s a guest star in it. But it’s really, it’s really beautiful.”

What do you think of Andrew Scott’s reprisal of his famous role? Share your thoughts with us on our Facebook page @EntertainmentDailyFix.