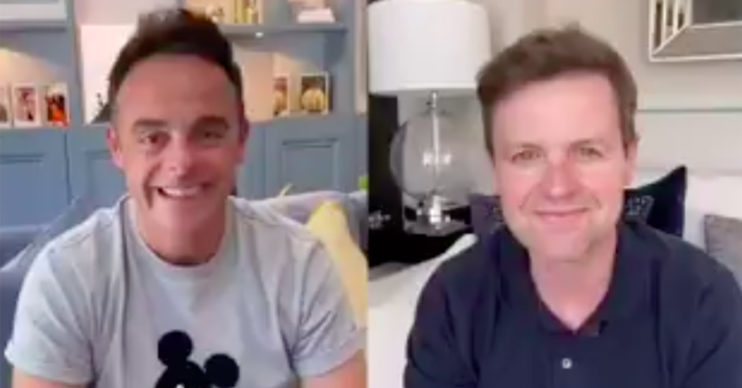 A little boy has just had the surprise of his life – as Ant and Dec congratulated him for his amazing fundraising efforts.

Tony, five, couldn’t believe it as he received a special video from the dynamic duo.

The little tot had to have both of his legs amputated at just 41 days old – after he was abused by his birth parents.

And at just five years old he walked 10km with his new prosthetic legs for charity.

Tony raised over an incredible £1.2 million for Evelina London Children’s Hospital. The same hospital that saved his life.

Pride of Britain chose Tom to receive an award along with a special message from his personal heroes – Ant and Dec.

The caption reads: “5 yr old Tony was so badly abused by his birth parents that he had to have both legs amputated. He’s an incredible little boy who has raised over £1m for the hospital that saved him.

“He loves Ant and Dec and this message shows they love him too.”

The video begins with an excited Tony covering his eyes awaiting his surprise.

He is then handed his adopted mum’s phone to watch the video clip.

Read more: Phil and Holly stunned by awkward live blunder on This Morning

As he sees the pair on his screen he stares at his mum in amazement.

“I love Ant and Dec”

Turning back to the screen he says: “I love Ant and Dec.”

Ant McPartlin says: “Hi Tony. Ant and Dec here, we just wanted to send you a message to say what an amazing thing you are doing.”

5 yr old Tony was so badly abused by his birth parents that he had to have both legs amputated. He’s an incredible little boy who has raised over £1m for the hospital that saved him @EvelinaLondon He loves @antanddec and this message shows they love him too!#ourprideofbritain pic.twitter.com/LLhDihKMNW

Declan Donnelly continues: “Absolutely amazing, you are a hero. Listen, thank you so much. Keep up the good work and we are sending you lots and lots of love, thanks, Tony.”

Tony was inspired to undergo his charitable fundraising act after seeing Captain Tom Moore raise over £32 million for the NHS.

The 100-year-old has since thanked and praised Tony for his incredible efforts.

Tom’s daughter, Hannah Ingram-Moore continued: “On behalf of Captain Tom and the entire family, we are so impressed by what you’ve done, Tony. It is absolutely incredible.”

What do you think of Ant and Dec’s message? Share your thoughts with us on our Facebook page @EntertainmentDailyFix.