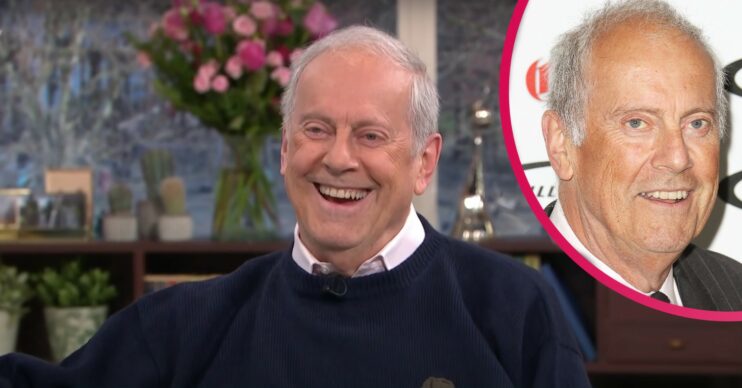 Who is Gyles Brandreth’s wife? What happened when a choir master ‘violated his innocence’?

The TV star opened up about his boarding school horror story

Gyles Brandreth is a resident talking head on the ITV daytime show This Morning – but its wife Michéle’s ear he chews off at home!

But even though he’s earned quite the professional reputation, the chirpy presenter is these days perhaps best known for his iconic knitted jumpers.

So who is the jumper-loving TV personality? Read on and we’ll tell you all we know.

Who is Gyles Brandreth?

Gyles Brandreth is a British broadcaster and TV presenter.

The star rose to fame when he became a TV presenter for TV-am’s Good Morning Britain in the 80s.

He also regularly featured on Channel 4’s Countdown in Dictionary Corner (more than 300 times!) and on the BBC’s The One Show.

Read more: This Morning fans joke that Gyles Brandreth is being ‘held hostage’ on show today

Gyles then tried his luck in the field of politics and became a member of parliament as a Conservative MP in 1992.

He represented the City of Chester till 1997.

The TV presenter was also a popular writer who published biographies about the royal family.

Now Gyles makes regular appearances as part of the This Morning family and hosts his own shows including Great Canal Journeys.

Was Gyles friends with Prince Philip?

Gyles is billed on his book Philip: The Final Portrait as a “close associate” of the late Prince Philip.

The pair met in the 1970s, when Gyles and Philip both worked on the National Playing Fields Association.

He interviewed him on a number of occasions, and the working relationship grew from there.

Gyles was previously asked if Prince Philip was a friend and he admitted: “Not at all.”

He added: “”The duke showed me great friendliness over 40 years, but royalty offer you friendliness, not friendship, and you have to remember the difference.”

How old is Gyles Brandreth?

This means the star is 73 years old.

How much is Gyles worth?

According to Otakukart, the former politician is worth a whopping £1.1 million.

Gyles can sing and he even starred in ITV’s All Star Musicals.

Speaking on Steph’s Packed Lunch about the show, he said: “It’s been an amazing experience.

“It’s a proper West End production so I’m surrounded by a dozen brilliant young people, who are so fit it’s frightening, who are dancing in our storm and I am in the middle of this trying to keep on top of it.

“But I wouldn’t have missed it for the world!”

Who is Gyles Brandreth’s wife?

The couple met at Oxford University and got married in 1973.

Michèle is a writer and publisher and the pair live in Barnes, south-west London together.

On the few occasions when I haven’t listened to my wife, it’s all gone wrong.

“And the truth is, on the few occasions when I haven’t listened to my wife, it’s all gone wrong, so basically I know that’s the right philosophy. My wife keeps me grounded.”

The couple also have three children together – Benet, Saethryd and Aphra.

Benet is a barrister, Saethryd is a journalist and Aphra is a former government economist.

Aphra has a daughter called Kiyo, making Gyles a grandfather.

Does Gyles Brandreth have a degree?

With Gyles’ impressive career, it’s no surprise that he studied at one of the most prestigious schools in the country.

While at Oxford, he also met celebrity chef Rick Stein, who sometimes cooks on This Morning.

Gyles Brandreth has got quite the collection of novelty knitwear.

The star is always serving up looks on television in a fabulously fun jumper for every occasion.

But where does he get his legendary jumpers from?

Gyles actually designs and creates them himself, with the help of designer George Hostler.

The pair even have their own knitwear store called Gyles & George.

Who is Gyles on Celebrity Gogglebox with?

However, the British actress left the show after just one series.

When asked why Sheila departed from the show, Gyles joked and said it was because she’d “had enough”.

He told the Radio Times: “I think Sheila felt that one series with Gyles in a year is enough, thank you very much.”

He then teamed up in 2020 with his good friend Dame Maureen Lipman.

However, she’s since left the show – but not because of Gyles.

She told the Loose Women that an episode of Naked Attraction was one of the reasons she left.

“I’ve seen all the male tackle I need to see for this lifetime to be honest,” she said.

She added that Gyles loves doing it but she was disappointed with the final edit.

“We had such a good time but none of the clever things we said went into it,” she said.

Last year, Gyles opened up about the abuse he suffered while attending boarding school Betteshanger in Kent.

He claimed to the Daily Mail that he was groomed by his choir master for over two years.

Gyles alleged: “One evening, when we choristers had finished our singing and we were trooping off to our dormitories, he called me back to have a word.

“As I stood facing him, alone on the darkened landing, he put his hands on my shoulders and bent down to kiss me.”

Gyles then explained: “Yes my innocence was violated and it was wrong. It should never had happened.”