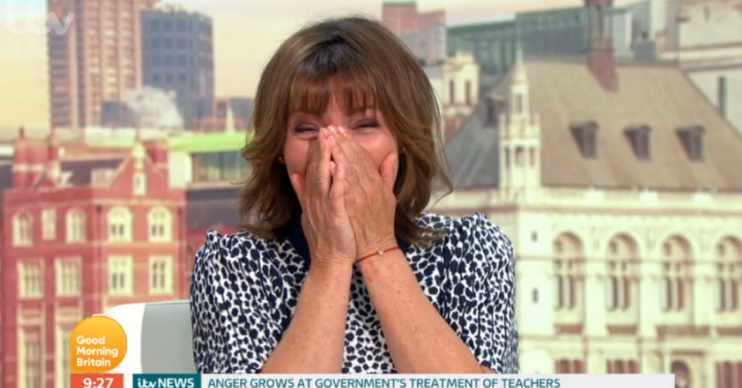 She got the giggles

Presenter Lorraine Kelly was left red-faced on Good Morning Britain as she made a name blunder during a segment about Prince Harry and Meghan Markle.

On today’s (Monday, May 18) episode of GMB, the daytime TV favourite was in hysterics as she mixed up the Duke and Duchess of Sussex’s names.

Speaking to the camera, Lorraine said, “There’s more news of Merry and Haghan…” before realising the error and bursting out laughing.

“Merry and Haghan!” she repeated, grinning as she turned to Dr Hilary, who was also on the programme.

“I’m going to call them that from now on,” Lorraine joked. “Merry and Haghan!”

After covering her face and laughing, she tried to gather herself and maintain a straight face. She said seriously: “Enough of this…”

But the mishap gave her a case of the giggles.

“…Meghan and Harry in today’s papers,” Lorraine managed. “Joining me now, royal editor Russell Myers. Russell, you have to call them that from now on.”

They went on to discuss reports the Sussexes have started repaying the cost of renovating their Frogmore Cottage home.

Earlier this year, the couple confirmed they would pay back the £2.4million cost of revamping the Windsor pad.

And they are have reportedly started a “rental-plus” agreement on the property, which they are keeping as their English base.

According to the Mail on Sunday, it was “quietly arranged” last month for them to pay just under £18k a month to retain the abode.

The sum is more than the commercial rate, but allows Harry and Meghan to contribute towards the renovation bill.

The Sovereign Grant originally covered the cost of the renovations.

It will reportedly take the couple over 11 years of payments to cover the costs of the project.