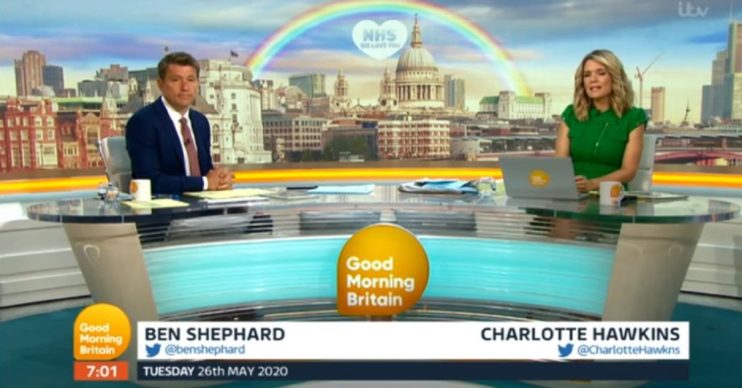 Presenters Ben Shephard and Charlotte Hawkins were reduced to tears on Good Morning Britain during an emotional interview with a mother separated from her child in lockdown.

During today’s (Tuesday, May 26) episode of GMB, Ben and Charlotte chatted with care worker Lisa Cave and her seven-year-old daughter, Ruby, who has asthma.

The pair featured in a video that went viral recently, taken when they were finally reunited after weeks apart.

What happened in the clip?

Lisa wears a full-body PPE suit in the clip, which includes a song by Calum Scott.

GMB producers surprised Lisa, Ruby and her dad during the interview by bringing Calum on.

And he delighted them with a live rendition of his song, You Are the Reason.

His singing reduced them to tears, and even Ben and Charlotte were crying after his emotive performance.

How did Ben and Charlotte react?

When it was over, Ben said, choking up: “I don’t know about you lot but I’m gone here!”

“I know, and me!” Charlotte said. “It really brings it home.”

'If we didn't carry on caring for people, then who would?'

Care worker Lisa Cave explains why she made the heartbreaking decision to send 7-year-old daughter Ruby who has severe asthma and respiratory problems, to live with her dad. to protect her from coronavirus.#GMB pic.twitter.com/z8e1PCBu5D

It also had viewers welling up.

One said: “Omg @GMB, talk about a tear jerker this morning and how amazing is Callum Scott’s voice?”

Another wrote, alongside a heart emoji: “Tears were flowing.”

Elsewhere on today’s GMB, viewers accused Ben of taking the side of Dominic Cummings.

He took part in a debate about Boris Johnson’s advisor going on a long drive despite the lockdown rules – and some viewers at home accused Ben of defending the decision.