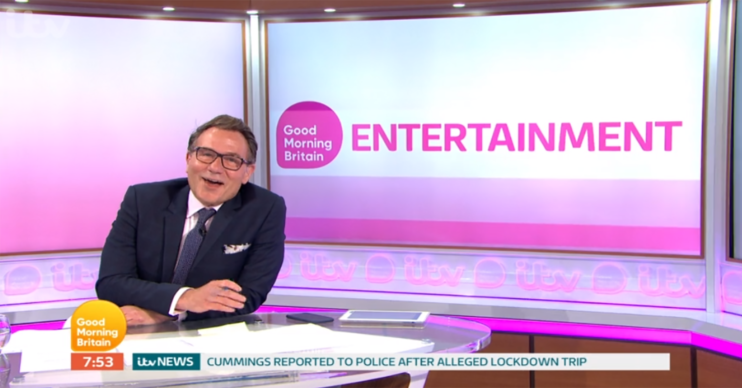 Richard updated viewers on how he's been spending lockdown

The entertainment correspondent returned to the daytime show today (May 25) after some time off.

Richard, 50, took the opportunity to send his partner a message live on air.

Richard, who keeps his relationship private, updated viewers on what he’s been up to during lockdown.

He admitted he’s been escaping to his “mancave” in his garden.

Richard said: “It’s been a busy old couple of months,” as a photo of his “mancave” shed popped up.

“It’s my mancave and believe me I need it because the other half and I like many people, have been working from home.

“And I’ve discovered that the other half, who is tuning in today so happy anniversary, is one of those people who talks into his phone like that,” as he held his phone up to his mouth.

He added: “Every time I see him do it, I have to leave the house otherwise I’ll shave his eyebrows off.”

Look who's back!@RichardAArnold reveals what he's been up to during lockdown.

Welcome back to #GMB Richard, we've missed you! pic.twitter.com/JJ7S6JgefX

Meanwhile, Richard revealed his hair is “out of control”.

Richard said: “Yes my hair is out of control. And I had a real back to school dream last night when you get a bit of a stress thinking about it.

My other half is tuning in today so happy anniversary by the way.

Richard recently amused fans by sharing a photo of his very long hair.

He wrote: “Me and the weave, back on the box @Gmb tomorrow in studio with @benshephardofficial & @charlottehawkins1 for Bank Holiday Monday.

“I’ll be the one raising a titter in a top knot. Hair: model’s own.”

Charlotte commented: “Looking forward to seeing you! You might need to take a hedge trimmer to that barnet though.”

Fans expressed their excitement to have Richard back on the programme.

Me and the weave, back on the box @Gmb tomorrow in studio with @benshephardofficial & @charlottehawkins1 for Bank Holiday Monday. I’ll be the one raising a titter in a top knot. Hair: model’s own #bedhead #sunday #sundayfunday #lockdown #gmb #itv

One person wrote: “Missed you Richard in the mornings.”

Another said: “Welcome back, you’ve been missed but not sure about the weave…”

A third commented: “OMG at last we get to see you, what a great team for Monday, will be fun and a lot more relaxed.”

Is your hair getting out of control during lockdown? Visit our Facebook Page @EntertainmentDailyFix and let us know what you think of this story.