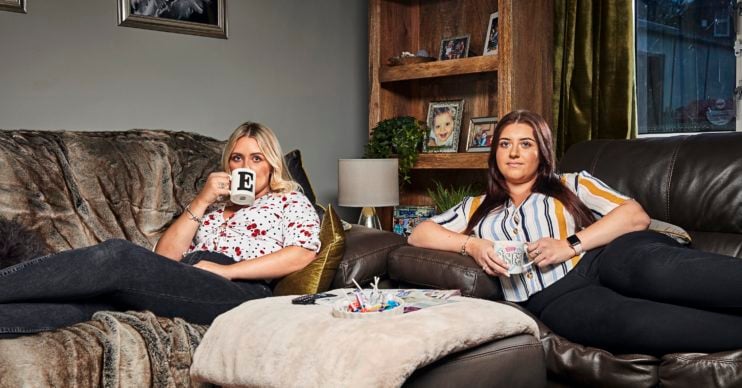 The telly favourite posted the make-up free picture to Instagram as she made the most of the glorious weekend weather.

Izzi is a Googlebox regular, usually appearing with sister Ellie as they share their hilarious views on popular TV programmes.

Now the series has come to an end, Izzi is taking some time away from the sofa and soaking up the sun in her back garden instead.

Alongside the cute snap of her and Bobby posing in the hot tub with wide grins, Izzi wrote: “Hope this beaut weather stays for the whole of summer!

Hope this beaut weather stays for the whole of summer! Feels like we’re on holiday ☀️ ‘scuse my bare face and mum bun 💁🏻‍♀️

“Feels like we’re on holiday ‘scuse my bare face and mum bun.”

What did Izzi’s followers say?

Izzi’s followers rushed to comment on the snap, reassuring Izzi how great she looks.

One wrote: “Gorgeous photo! No pardons needed, you both look gorgeous!”

Another added: “Gorgeous pic, you look so fresh faced and young

“You are beautiful without make up,” someone else said.

A fourth commented: “You look amazing, you are both so cute.”

As well as her son Bobby, Izzi is mum to daughter Bessie-Rose, who she gave birth to in February.

Gogglebox fans were delighted when Izzi introduced the baby girl on the show at the beginning of March.

Izzi and Ellie were caught up in controversy in April when they were accused of breaking social distancing rules.

Viewers of the Channel 4 show know sisters Ellie and Izzi don’t live together, with Ellie previously seen with her boyfriend instead of her sibling.

On April 17 the sisters were on the show together – albeit sitting on separate sofas at a distance – despite Boris Johnson banning people from visiting family in their homes.

Channel 4’s message at the start of the show insisted all social distancing rules were being adhered too, but viewers weren’t so sure, taking to Twitter to voice concern.

At the time of the complaints, a Channel 4 spokesperson revealed that they filmed recent episodes BEFORE Boris Johnson’s lockdown announcement.

They added that going forward “stricter filming protocols” were in place. And safety of crew and stars of the show was “paramount”.