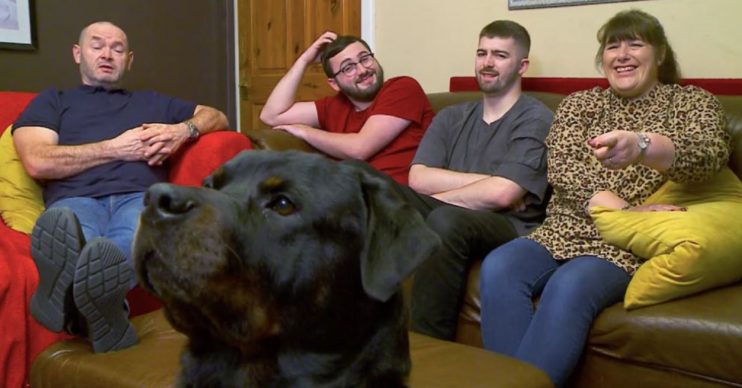 He had no chance of passing

The Malone family from Gogglebox had fans in stitches with a clip of their dog Bob spectacularly failing a TikTok challenge.

All this week, social media users have been filming themselves testing their pooches’ patience.

The challenge is to present your doggo with a plate of goodies and tell them not to eat anything while you pop out of sight – and film the results.

Read more: Scarlett Moffatt hits out at Gogglebox for making her look ‘thick’

It’s a spin on a similar meme that sees parents doing the same with their toddlers.

How did Bob do?

One of the Malone family lads, Tom, filmed himself trying out the challenge on rottweiler Bob.

Safe to say he failed it miserably, to hilarious effect.

In the clip, Tom shows the dog a plate of delicious-looking cakes. The pooch stares at them longingly as Tom tells him: “Right, I’m going to go out of the room and you’re going to leave the cakes, alright Bob? See how you do.”

Unfortunately, as soon as Bob is confident Tom’s out of sight, he gets up from his spot on the couch to chomp away.

“Bob!” Tom exclaims as he reenters the room, to find the dog has chowed down on two of the cakes.

“Hahaha brilliant x,” said one of his followers.

“This cheered me up,” said another, using a laughing-crying emoji.

“Aww Bob, such a silly challenge for a gorgeous boy,” someone else wrote, adding alongside a string of heart-eye emojis: “That face.”

A fourth said: “That’s mint that mate, go on Bob.”

This cheered me up 🤣

Sharing a snap of themselves looking happy but dishevelled, the pals joked to fans that they are beginning to look like each other. Many of their followers agreed, with some joking the pair look like twins.