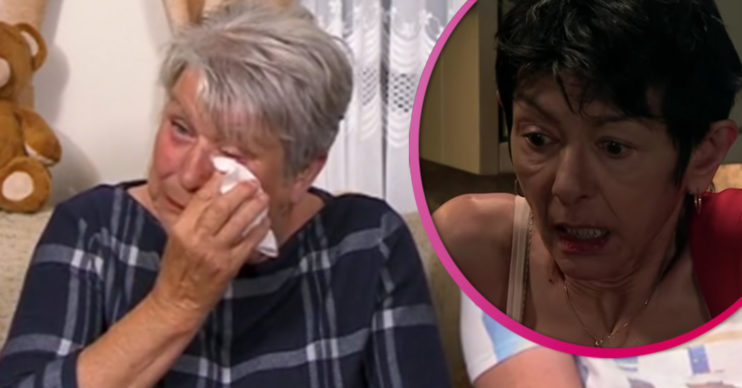 The gang were disgusted by Geoff's vile actions towards Yasmeen

The stars of Gogglebox broke down in tears last night while watching Yasmeen Nazir’s abuse scenes in Coronation Street.

In a downbeat part of the show, the everyday telly critics watched Geoff Metcalfe forcing Yasmeen to put on a dress.

The evil Corrie abuser had bought the red frock from one of his escorts.

Sobbing into a tissue, Gogglebox’s Jenny Newby said: “There’ll be people out there who are treated like this.”

Jenny’s best friend Lee Riley told her it is “just a show”, but clearly distressed, she shot back: “Yes, well. For you it is.”

Shirley was also left wiping tears from her eyes, as husband Dave told her: “Don’t upset yourself. It’s only a bloody TV programme.”

Sisters Izzi and Ellie Warner were also outraged as the horrible scenes unfolded.

Izzi said: “I can’t stand him, Ellie. He actually boils my [bleep].”

The stars then sat horrified as Geoff pushed Yasmeen onto the kitchen floor and threw chips at her.

As she cowered in terror, Geoff snidely said: “Do you want a chip, little doggy. Here you are, have a chip.”

Pete Sandiford, meanwhile, exclaimed: “What is he doing?!”

Do you want a chip, little doggy. Here you are, have a chip.

Following the incident with the dress and the chips, Yasmeen went on to stab Geoff and leave him for dead.

As her vile husband back her into a corner and taunted her with a knife, Yasmeen grabbed a wine bottle and smashed it over his head.

She then pulled the large kitchen knife from his hand and stabbed him in the neck in an act of self-defence.

Geoff staggered into the living room before landing in a heap on the carpet.

Coronation Street fans now know that Geoff didn’t die in the incident and Yasmeen was arrested for assault.

After waking up in hospital, Geoff disgusted viewers by claiming Yasmeen had tried to murder him.

In next week’s Corrie episodes, Yasmeen attends her bail hearing. Imran is representing her and attempts to fight her corner in court.

Coronation Street bosses have since confirmed that the Yasmeen and Geoff abuse storyline will continue until the end of the year.