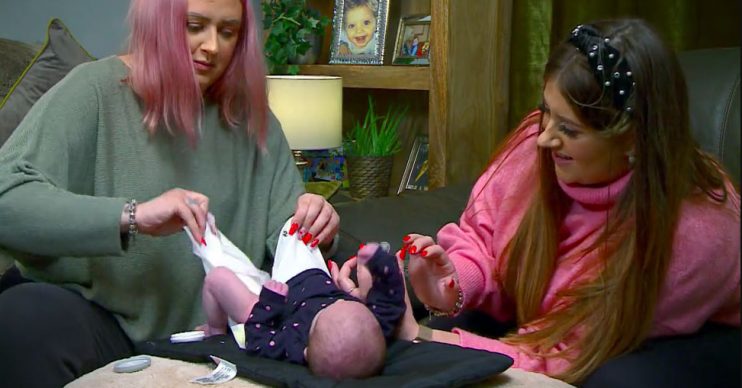 Viewers of Gogglebox were delighted on Friday night when the baby girl fan of favourite Izzi received her own TV debut.

The Channel 4 star, 25, showed off her adorable one month old baby Bessie Rose in the opening scenes of the episode.

Her older sister, Ellie, helped her change the tot’s nappy after joking that she didn’t trust her with her long nail extensions.

The northern sisters enjoyed a bit of back and forth banter as they put on a fresh diaper, which seemed to go down well with viewers at home.

Several took to Twitter to share their enthusiasm on seeing the baby and also the sisters back on screen.

One viewer enthused: “How amazing does Izzi look on #Gogglebox her hair is gorgeous she’s absolutely glowing. Congratulations on welcoming baby Bessie.”

Read more: Scarlett Moffatt hits back at rumours she was fired from TV role

Izzi is glowing after have her beautiful baby!

One commented: “I wish I looked as good as Izzi, @ellieandizzi, now let alone 4 weeks after having a baby! High five Mama #Gogglebox.”

And another remarked: “Izzi is glowing after have her beautiful baby! She looks fab.”

Bessie is Izzi’s second child, as she already has a son, Bobby.

The sisters settled into an episode of First Dates and joked about whether they would be up for kissing a date on a first meeting.

Ellie poked fun at her admission with a rather cheeky reply, “You conceived Bobbie on a first date.”

But Izzi didn’t seem too bothered and simply joked, “Thank you for outing me!”

Although this is the first time little Bessie has appeared on screen, she has been shared several times on Izzi’s official instagram account.

The proud mum first showed off her daughter on February 4 of this year when she shared a picture of her sleeping baby.

Sharing to her some 50,000 followers, she captioned the photo with: “So pleased to announce the safe arrival of our darling baby girl Bessie Rose born on 3rd February 2020 1:44pm, weighing 7lb 3oz.

“We are all totally smitten by her, feeling so blessed and happy  thanks to everyone for all your well wishes xx”

Did you catch Bessie’s debut on Gogglebox? Share your thoughts with us on our Facebook page @EntertainmentDailyFix.