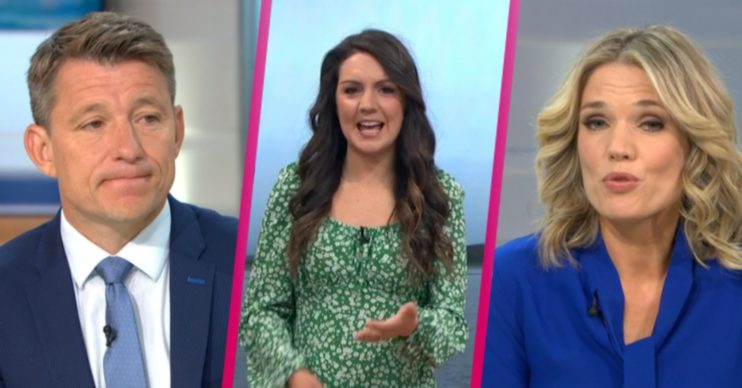 She put it down to gin

Meteorologist Laura Tobin was cut off mid-sentence on today’s episode of GMB in a live technical blunder.

During this morning’s (Wednesday, July 15) episode, presenter Ben Shephard was telling viewers about a special gift he received from Buckingham Palace.

The dad of two said he was sent a bottle of special gin made from ingredients grown at the palace and was discussing it with his co-host, Charlotte Hawkins.

What happened with Laura Tobin on Good Morning Britain?

He said: “It’s really really special, and in theory it’s the Queen’s back yard that has put these botanicals together. Very floral, very tasty, Charlotte. Very regal. And it was the weather for gin yesterday, we had some bright spells. The question is, is it gin weather today, Laura?”

Weatherwoman Laura then chimed in with her opinion, as she said: “Indoor gin drinking is probably…”

But unfortunately, the programme cut to an advert from sponsor Boxed Boilers, completely drowning Laura out.

Confused, she said, “Oh!” and when it got back to the regular programme, she joked: “I think somebody had been drinking gin just then…”

Ben presented GMB earlier this week with Kate Garraway. She has been absent for months due to her husband Derek’s battle with coronavirus and subsequent health struggle.

And at one point, an appreciative Kate told her pal Ben that he “healed her”.

Derek went into in intensive care in March with coronavirus. Now, he’s free of the killer virus, but it’s ravaged his body so he remains in a serious condition.

On Tuesday’s (July 14) Good Morning Britain, Kate and Ben were discussing the news that NASA reckon star signs have shifted and zodiac signs may be wrong.

Ben discovered that he is now an Ophiuchus, the snake bearer, which is for people born between November 29 and December 17.

Ben said: “I liked being Sagittarius. Always ready to learn, have a spirit of independence, love the idea of finding freedom. You’re fun to be with, sexy without even trying…”

Kate added: “You’re not Ophiuchus which is passionate, a healer and flamboyant. You are a bit of a healer. You healed me.”