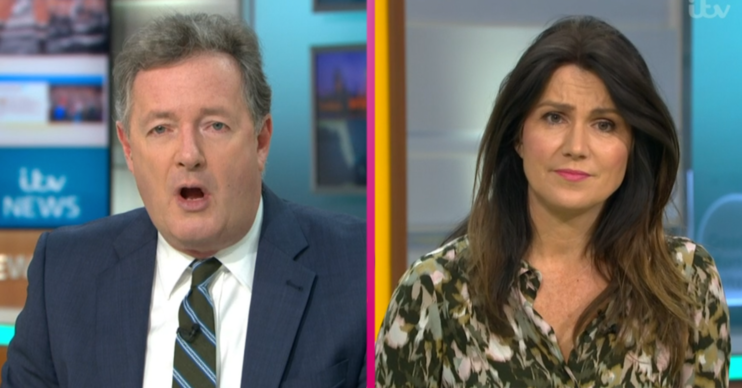 Piers Morgan and Susanna Reid were branded “pathetic” after kicking off the show with an exhausting 10 minute rant about the government.

By the end of the furious monologue, viewers took to Twitter to complain about the presenters.

Another added: “@piersmorgan switched off again within 3 minutes, all @GMB is about is his personal war with the government because they have boycotted the show, negative b***end and @susannareid100 is on par with him too.”

Shortly after, a fourth wrote: “F***ing state of  @piersmorgan and @susannareid100 this morning on @GMB, like pair of children. No wonder nobody want to speak to you.”

“It’s 50 days today since the government launched its boycott of Good Morning Britain.

He added: “One of the last people we saw was Matt Hancock – who is currently doing the rounds today.”

The pair then proceeded to play old footage of the Health Secretary’s last interview on the programme and ridiculed him.

“We’ll be running more extracts from our interviews with Matt Hancock to show really how they got it all wrong – which is why they don’t want to talk to us,” Piers added.

“It’s because we keep asking them difficult questions, like why did you say on March 3 that we should all still be shaking hands?

“Why did you say on March 3 we should all continue flying everywhere?

“Now we know the Cheltenham Festival and the Atletico Madrid Liverpool game became epicentres in this country for infection from coronavirus.

“So, we’ll have more from Matt Hancock while he’s boasting on other networks about what a great job he’s done,” he concluded.

Afterwards, Susanna ripped into Boris Johnson for boycotting in the programme.

Poking fun at the Prime Minister, she said: “This is the last time we had an encounter with Boris Johnson.”

'We keep asking them difficult questions.'@piersmorgan believes the reason why ministers don't want to come on the show is because they don't want to face questions about their handling of the coronavirus pandemic.

Today is the 50th day of the government's boycott of GMB. pic.twitter.com/1bR30fs2rk

Susanna added: “This is when our reporter Jonathan Swain, just before the election in December, said will you stick to your commitment to talk to Piers and Susanna on Good Morning Britain?

“Boris Johnson said yes of course I will – and then walked into a fridge.”

Piers then admitted it was unlikely the Prime Minister would ever come on the show again.

Susanna then hit back: “But we do know he’ll be very chilled when he does appear on the programme.”