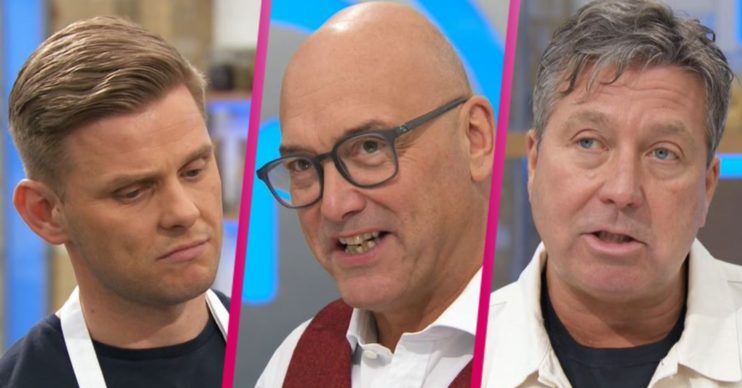 Many felt the presenter didn't deserve to go home

The 41-year-old dad of two, whose ex was late reality star Jade Goody, competed in the third week of heats on Wednesday (July 15) evening. With him were actor Felicity Montagu, rapper Lady Leshurr and TV presenters Amar Latif and Gethin Jones.

What happened with Jeff Brazier on Celebrity MasterChef?

Jeff did well in the first two round and for the finale, produced a dish comprising cod topped with watercress, crushed new potatoes with wild garlic and roasted cherry tomatoes, topped with a lemon and mustard dressing.

Unfortunately for Jeff and his fans, judges John Torode and Gregg Wallace chose to eliminate him from the competition.

Reacting on Twitter, a flood of viewers branded the decision “outrageous” and said Gethin should have gone instead.

Gethin rustled up shepherd’s pie and peas for the last part of the programme. Many of those watching felt that Jeff’s dish was far superior.

How did viewers react to Jeff’s elimination?

One said on Twitter: “Really don’t think Jeff deserved to go out against a shepherd’s pie and some peas #celebritymasterchef.”

Another wrote: “#celebritymasterchef @JeffBrazier you are kidding me! Jeff was the only one who could cook!”

A third said: “#celebritymasterchef no way did Jeff Brazier deserve [to] be eliminated over bland shepherd’s pie and peas from Gethin! Joke, so disappointed!”

#celebritymasterchef @JeffBrazier you are kidding me! Jeff was the only one who could cook!

“Shocked at the Jeff decision,” someone else tweeted.

“Outrageous!” fumed another, adding: “Jeff was the best chef there!”

A sixth demanded: “#celebritymasterchef are you havin’ a laugh?! Jeff was one of the best on there… should have been Gethin (sorry, Gethin).”

Shocked at the Jeff decision #celebritymasterchef

Outrageous!!! Jeff was the best chef there! #celebritymasterchef

#celebritymasterchef are you havin a laf??! Jeff was one of the best on there…should have been gethin (sorry gethin) 😂😖

After his defeat, Jeff told viewers how he thought his boys, Bobby, 17, and Freddie, 15, would react.

He said, at the end of the episode: “I tell you, all I can really think is that the kids are really going to take the mickey out of me as soon as I get home.

“They’re going to absolutely tear me to shreds. They’ll have a laugh, but they’ll feel sorry for me, I think.”

What did you think of the decision? Leave us a comment on our Facebook page @EntertainmentDailyFix and let us know.