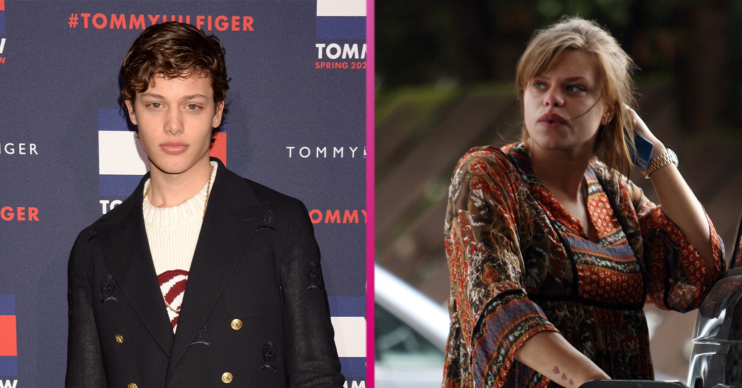 Fans of Jade Goody are taken aback by how much she looks like her son Bobby.

The late reality star died of cervical cancer in 2009, when sons Bobby and Freddy were just five and six years old.

And now, fans can’t believe the family resemblance between her and her eldest boy.

It comes after Bobby shared a photo of himself as he reached 70k followers on Instagram.

In the snap, the 17-year-old is seen flashing a huge grin as he sits on a train.

The post didn’t go unnoticed by Jade’s fans, who rushed to comment on the similarities between the two.

One wrote: “Your mother’s double, she would be so so proud of you.”

Another commented: “That smile reminds me of your mum 😊 She had the most infectious laugh and smile with dimples ❤️ she would be super proud of u and Freddy.”

A third said: “Lovely young man! @bobbybrazier credit to yourself and your Mum & Dad and rest of your family who have influenced the beautiful soul inside and out you are! 😊 .”

A fourth added: “I was your mommy’s fan, and it’s nice to watch you grow with such beautiful personality and into a wonderful human being.”

While another wrote: “Your mum would be so proud ❤️ .”

Last month, Bobby shared a special message for his mum on what would have been her 39th birthday.

To mark the occasion, he took to social media to post a tribute to Jade, whom he called a ‘legend’.

On his Instagram Stories, the teenager uploaded a photo of his mum eating chips while wearing a glamorous gown.

He added, alongside a heart emoji: “Legends never die.”

Meanwhile, dad Jeff Brazier has ensured Jade’s memory is never too far away.

He recently decorated a bedroom for 15-year-old son Freddy, filled with touching tributes to his late mum.

In an Instagram Story revealing the teenager’s bedroom makeover, there is a dedicated shelf filled with framed pictures of Freddy and brother Bobby as toddlers dressed in Santa costumes with their mum.

Additionally, another framed photo was a promotional snap from an advert for her 2009 documentary.

Although the dad-of-two previously admitted that he banned his sons from watching a controversial documentary about their mum, which was aired last year.

He explained to the Daily Star: “While they are coming to the end of their childhood, and they are able to take on board more adult themes, I don’t think they are quite ready to watch a large percentage of what was being shown.”

He added: “It’s not like they would find out so much more about Mum in a lovely or warm way. There are a lot of really adult themes there that they are probably not going to get their head around. They could find it upsetting.”

Since growing up, Bobby has carved out a successful career as a model, having signed with the prestigious Unsigned Agency.

His work includes catwalk appearances for designers such as Dolce and Gabbana at London Fashion Week. Bobby has also collaborated with Tommy Hilfiger.

Proud dad Jeff has previously spoken about his son’s burgeoning modelling career. He told The Sun: “He’s signed up with a model agency. Because he had quite a few that wanted to take him on.”