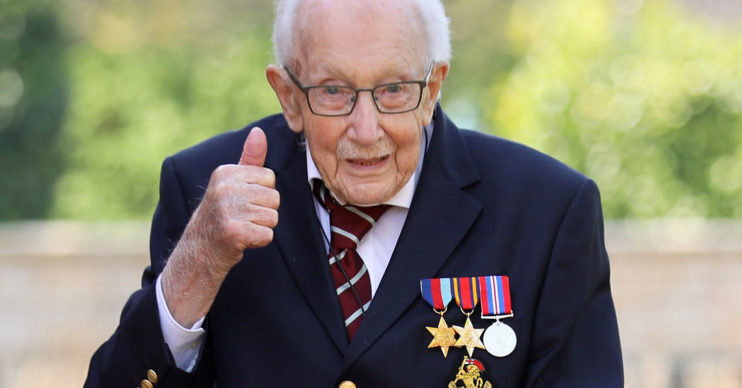 It will air just a week after his own birthday

The 99-year-old war veteran has raised more than £28 million for the NHS by successfully walking the length of his garden 100 times before his 100th birthday on April 30.

In a new doc, he will open up about his experiences in a 30 minute film airing on VE Day (May 8).

Captain Tom’s War will air just a week after his own birthday celebrations as he reflects on his time fighting in Burma during the war from 1941 to 1944.

£28 Million, how magnificent!
Thank you all so much.
It’s a beautiful afternoon for a little walk, don’t you think?@NHSuk @NHSCharities #TomorrowWillBeAGoodDay #walkwithtom

Read More:Dr Hilary Jones warns families might have to spend Christmas apart due to coronavirus

What will the show be about?

The former British Army Officer will honour the soldiers who fought in what has become known as The Forgotten War.

It saw millions of Allied troops from 40 nations trying to battle the invading forces of Imperial Japan from the British colony.

Captain Tom started officer trainer at the age of 20 in 1940 and served in India before reaching Burma.

He wants to redress the balance by making the programme to educate people on what happened.

The programme will also feature his daughters Lucy and Hannah as they reveal family photos from their trip back to Burma.

Captain Tom Moore, Britain’s new national treasure, will tell the story of his part in World War II for a new ITV documentary to be shown on VE Day. https://t.co/HgbwCfEEr1 pic.twitter.com/8CbuWbUFvz

“But in which our troops suffered unthinkable hardship and tens of thousands of British soldiers fought and died.

“Hearing this from Captain Tom Moore means we will find out a lot more about the man who has done so much to raise our spirits at this time.

“And the experience he and many others faced during World War Two on an occasion when we rightly come together to thank them for their sacrifice.”

Read More:Meghan Markle ‘worried about homesick Harry as he struggles to settle into LA life’

The announcement comes after it was revealed Captain Tom has teamed up with Michael Ball for a new rendition of ‘You’ll Never Walk Alone’ to add to his NHS fundraising.