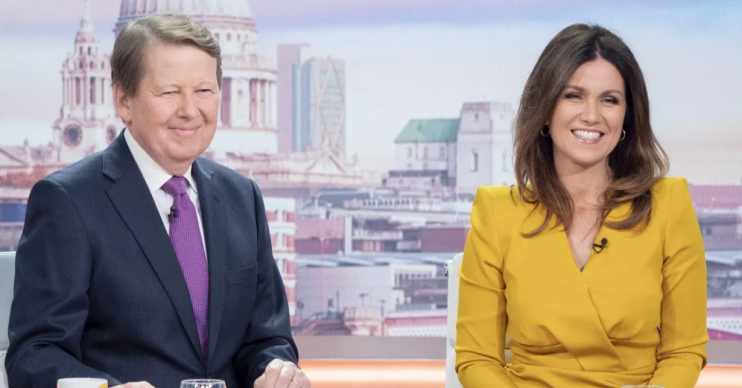 The TV presenters – who worked together on BBC Breakfast until Susanna departed for ITV in 2014 – shared an emotional reunion on ITV this morning (24.02.20) when Bill stepped in for Piers Morgan during his time off.

And the veteran broadcaster is “thrilled” to be working alongside her again.

Starting the show today, Susanna said: “I haven’t heard that for a number of years, Susanna Reid and Bill Turnbull.”

Bill added: “I know, go on pinch me because I can’t believe this is really happening.”

Susanna and Bill had an emotional embrace, before Bill joked: “And to be on the television with the legend that is Andi Peters.”

Bill, 64, will fill in for Piers on GMB for three days this week, much to his 49-year-old co-star’s delight.

She said: “I’ve now got Therapeutic Monday, Tuesday and Wednesday.”

But the star – who has been fighting prostate cancer – admits he had reservations about the early starts after saying he would never do breakfast TV again when he quit BBC Breakfast in 2016.

I know, go on pinch me because I can’t believe this is really happening.

He recently said: “I’m in two minds about the early mornings. On one hand, it’s great to be back doing live television.

“The other part of me thinks, ‘What on earth am I doing?’ Having sworn never to do breakfast television again!

“But here I am doing it and it’s only in the short term.”

And Bill admitted he was worried about getting “hot flushes” on set, because they are one of the side effects of his hormone treatment medication.

He previously said: “When you have cancer, it’s always there. But currently I feel really good, most of the time. I have changed my diet considerably and in the past few months I have felt healthier than I have in a long time.

“The only thing I do have is, because I’m on a hormone treatment, I do get hot flushes sometimes. I’m a bit nervous as it could be slightly awkward in the studio.

“Normally what happens if I get a hot flush, I get all red in the face and I take my jacket off and cool down. I’m not sure I’m going to be able to do that. We may need to get a little fan.”

Viewers were also happy to see Bill and Susanna back together.

One person wrote on twitter: “Keep it this way. Susanna flourished with Bill by her side again and the debates were first class today.”

Keep it this way. Susanna flourished with Bill by her side again and the debates were first class today.

Another said: “It’s a treat to watch Susanna Reid with Bill Turnbull this morning. She looks comfortable and relaxed.”

It’s a treat to watch Susanna Reid with Bill Turnbull this morning. She looks comfortable and relaxed.

A third added: “Great to see Susanna and Bill back together!”

@susannareid100 @GMB
Great to see Susanna and Bill back together!